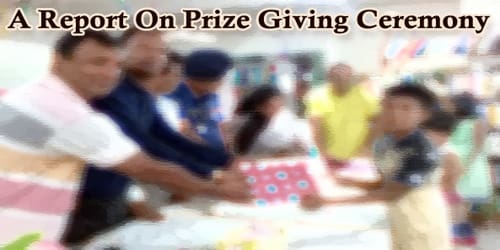 The prize-giving ceremony of (Name of school/college)……. of this year was held yesterday with a lot of festivities. Renowned educationist Principal ……(Name) was present as the chief guest. The District Commissioner of (District name) was invited as the special guest in the function. Other distinguished guests, all the students, and teachers were present on the occasion.

The large school/college compound was beautifully decorated with flags and festoons. There were very good seating arrangements. First of all, the principal read out the annual report of the college. Then the chief guest delivered his speech. His speech was full of inspiration for the students. After that, the special guest stood up to say something. His speech was also very instructive for the students.

Then followed the prize-giving session. The students extraordinary in various activities were selected earlier. The students received their prizes from the hands of the chief guest. Each student was given Tk. 500 and a crest.

In the end there was a cultural program. The students performed very nicely. They sang songs, recited poems and staged a short drama. The audiences were marveled at the performance of the students.

The program ended with the closing speech of the Principal. He thanked the guests, the students and all others who attended the program.