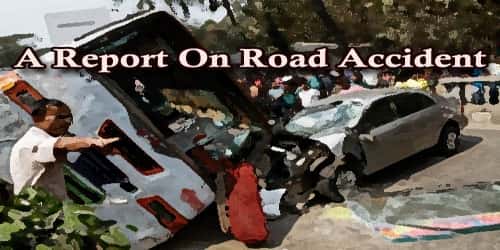 A Report On Road Accident On (Area Name)….. Highway

A terrible road accident near Meghna/Jamuna Bridge on the (Area name)……. Highway took five lives yesterday at about 7.30 a.m. All the victims were the passengers of a car/taxi, and the members of a family.

(Bus company name)…, a (District name)…. bound luxury coach was running at full speed. A car/taxi was coming from the opposite direction. Suddenly the car/taxi moved to the wrong side and collided with the bus. The bus somehow escaped almost unhurt because it was heavy and strong. But the car/taxi turned into a pile of broken steel in the twinkling of an eye. There were three young men, two women and two children in the car/taxi. One eye witness said: “The accident occurred due to the car/taxi drivers fault. It was running very recklessly and its sudden move to the wrong side caused the accident.”

Local people rushed to the spot and they found the driver (Name…, Age….) dead. They took the other victims to District Sadar Hospital. Miraculously the two children’s condition was good. They are quite safe now. But the doctor found the two women dead (Name…., Age……). The young man’s condition was found very critical. Till this report being written, the young man has been shifted to Dhaka Medical College Hospital for better treatment.

The passengers in the car were a family. They went to visit their village home at (village name). They were coming to Dhaka hiring this car/taxi from (Village name). Among the two deceased women, one (Name…) was the young man’s wife and the other was his mother. This young man (Name…..) is a banker.

A case has been filed in District Sadar Police Station about this accident.