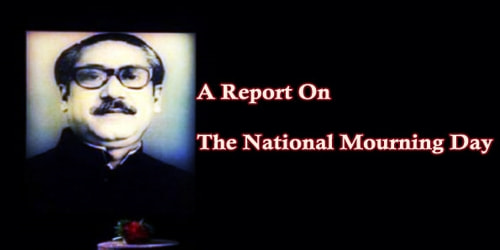 A Report On The National Mourning Day Celebrated At (Institution Name)……. School/College

15th August, the ‘National Mourning Day’ was celebrated with due respect and solemnity at (Institution name)………School/College yesterday tinder the chairmanship of the principal of the school/college. District Commissioner (DC) was the chief guest of the program.

On this occasion, the school/college campus was nicely decorated with various festoons, banners, and placards. All the teachers, students and some invited guests were present in the program. Everybody wore a black badge to show respect to the martyrs who were killed brutally on the night of 15th August 1975.

Eminent speakers in their valuable speech commemorated the great contribution of the father of the nation, Bangabandhu Sheik Majibur Rahman for the emergence of independent Bangladesh as well as his earnest and tireless efforts to make a golden Bangladesh. They criticized abominably the heinous killers who killed brutally at least 32 persons. They demanded immediate arrests of the criminals who are in abroad now. They also prayed for the departed soul to Allah. The program was rounded off by a Milad and Doa-Mahfil seeking peace and the salvation of the departed souls.

At last, the principal closed the function with a vote of thanks to chief guest and everybody concerned.