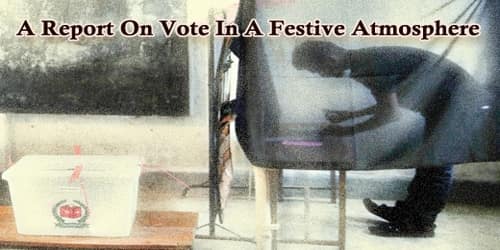 A Report On Vote In A Festive Atmosphere

Yesterday along with the whole country, National Parliamentary Election was held in all 45 centers of …….. Upazilla under ……… district in a festive atmosphere. While visiting the …….. center of the municipal area, this reporter found a huge gathering of the enthusiastic voters in the center compound. But all they were much disciplined. They were eagerly waiting in queues to vote for their favorite candidates.

There was a considerable presence of the female voters. “We’ve come here to vote this year to establish our rights and privileges as citizens of Bangladesh. Today we feel free and want to elect our representatives for the parliament,” one of the male/female voters told this reporter.

The security arrangements were also very tight. Police, Ansar, B.G.B, and Army were deployed to ensure a free and fair election. The local leaders of the main parties also expressed their satisfaction. The presiding officer hoped that about 90% of votes would be cast. The European Parliamentary Committee also paid a visit to this particular center to observe the parliamentary election of Bangladesh. They also expressed great satisfaction in the overall atmosphere of the election.