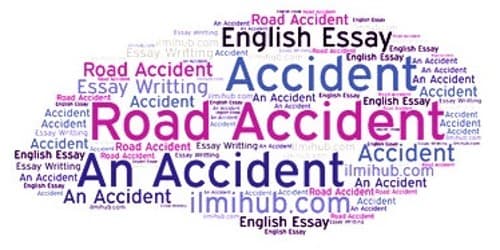 Accidents or mishaps keep happening every day and every now and then. The road in front of my school is a narrow one. It is also very busy. Every afternoon, when the school has dismissed the road, becomes almost impassable as children, bicycles, cars, and buses jostle and struggle to use it. Sometimes a policeman is there to help things out, but generally chaos reigns and we have to be careful not to get involved in an accident. Some mishaps are unnoticeable or are a nuisance, others get serious and unavoidable. A few accidents had already occurred. I was a witness to one.

If happened just after school. As usual, the road was an utter madhouse. Children were running across the road to get to their cars and buses. Cars and buses honked angrily at them.

Just then I saw a young boy make a dash across the road. There was a loud blare of a horn, a squeal of brakes and I saw a car knock into the boy. He fell as though his feet were swept from under him.

Fortunately, the car was not moving very fast and the driver managed to stop the car before a wheel could run over the fallen boy. The sight of blood was really horrible. People gathered around the child. I too went to see who he was.

All traffic stopped. I ran over to the boy and saw blood on the road. He was bleeding from a cut on his head. A man came and examined the boy. Meanwhile, another man had called up the hospital for an ambulance. After a few minutes, the ambulance of a nearby private hospital came and carefully placed the boy on the stretcher and took him away. Then he lifted the boy and carried him to a car. They sped off, presumably to the hospital.

Many people surrounded the driver who looked dazed and bewildered. A policeman came to calm things down. Some people started abusing and hitting the car driver. Someone tried to convince them that it was not his fault. It was just an accident.  I felt so frightened and anxious at the time.

As there was nothing I could do, I turned and walked down the road carefully. It was terrible to witness an accident. I certainly would not like to be involved in one. I think no amount of rules and regulations can solve this problem. An accident may change your life forever but in the larger scheme of things, you will find that it was inevitable and you did learn a few lessons from it.