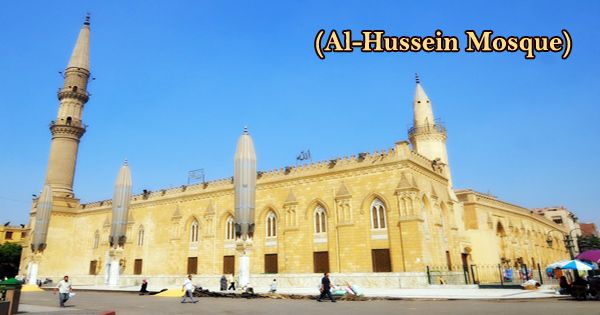 A Visit To A Historical Place/Building (Al-Hussein Mosque)

Just a short distance from downtown Cairo, in an area of the city known as Old Cairo or Islamic Cairo, the Imam Hussein Mosque (Arabic: مسجد الإمام ٱلحُسين‎) or Jame Sayyidna Husayn (Arabic: جامِع سيّدنا ٱلحُسين‎) is located. It is the Husayn ibn Ali mosque and mausoleum, originally built in 1154, and later restored in 1874. There is a range of popular attractions in the city, including a number of historic mosques, as well as the famous Khan el-Khalili Bazaar, where merchants have been selling their goods since the 14th century. It is deemed to be one of Egypt’s holiest Islamic sites. The Al-Hussein Mosque is the most powerful mosque in all of Egypt and is so important that only Muslims can join it. Every day, hundreds come here to pray, and as many as 10,000 on Fridays. The Al Hussein Mosque is perhaps best known because it is home to the oldest complete Quran manuscript in the world. It is also claimed that the head of Hussein, the grandson of the prophet Muhammad, who was killed in Iraq by the Umayyads in 680, should be housed. His head was sent to Cairo, Egypt in 1153 after the decapitation of Hussain ibn Ali in Iraq during the Battle of Karbala, to be covered by the construction of a mausoleum completed for it in 1154. Only the lower part of the south side gate called Bab Al-Akhdar of this original Fatimid architectural structure remains original today in the mosque. In front of the mosque, three high-tech umbrellas are open to shade the overflow congregation on Fridays. In the Great Mosque in Medina, they are close to the courtyard umbrella columns. Today in Cairo, the mosque is a major hub for congregational prayers, and the streets and maydan are paved on Fridays at noon with mats and rugs laid down by the overflowing congregation. 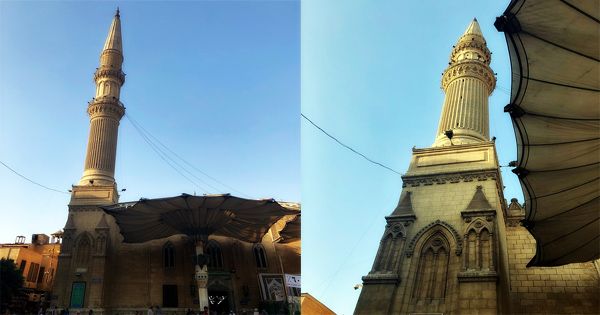 (Left: One of three canopy umbrellas placed in the courtyard of the mosque.)

Because of its strict centrality and its antiquated legacy, the mosque is regularly visited by unfamiliar dignitaries and other Muslim pioneers from around the globe. All that survives from the Fatimid structure (and even this is dicey) is the lower part of the entryway at the south corner of the present mosque the Bab al-Akhdar. Over the remains of the Fatimid gateway, a minaret with beautifully carved arabesque panels in stucco, added by the Ayyubids in 1237, rises; the additional Turkish-style minarets are part of the mosque of Khedive Ismail. The wooden cenotaph of Al-Husayn, a splendid example of wood carving from the twelfth century, is on display in the Museum of Islamic Art. Al Hussein Mosque probably won’t be the most breathtaking or most grand mosque in Egypt, however, it is as yet an intriguing mosque to visit, and it is likewise guest cordial, implying that even non-Muslims are free to enter the mosque, aside from during prayer times on Fridays. Three wide canopy umbrellas are the most recent additions to Al-Hussein Mosque today. It was added to shield those who pray outside during the summer days from the sun and during the winter from the rain. Ibn Jubayr, a Cairo tourist, reported in 1187 his impressions of a visit to the shrine: “We observed men kissing the blessed tomb, surrounding it, throwing themselves on it … calling out invocations … and offering up humble supplications such as would melt the heart and split the hardest flint.” Those who wish to attend the Al Hussein Mosque should dress appropriately/conservatively, as with all mosques, and women should also cover their hair with a headscarf as a sign of respect. Even though non-Muslims are not allowed into the building, tourists still view the structure from the outside.