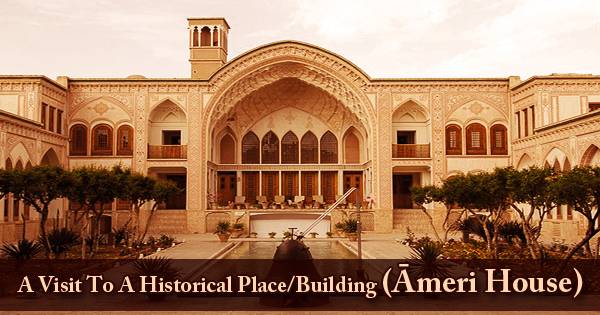 The Āmeris House (Persian: خانه عامری‌ها) originally built during the Zand period (1750-94); it is a sprawling traditional home in Kashan Iran. It is situated in the city’s old neighborhood and draws many visitors as a tourist site and as a luxury hotel. The house provides tourists a vivid view of the lifestyle of affluent families in the 18th century in both respects. After a series of earthquakes in the 18th century, the city of Kashan was restored in the middle of the 19th century. It was originally built as a family residence for Agha Āmeri, the governor of Kashan, during the reign of the Zand dynasty, and is now restored and converted into a hotel in the traditional style. Together with the Borujerdi House, the Tabātabāei House, and others, it is one of the prominent historic houses of Kashan. In the second half of the 18th century, during the reign of the Zand dynasty, the Ameri House was founded. It was intended for Agha Ameri, the Kashan governor, and his relatives. By supplying Shah with weapons and ensuring the protection of the road from Teheran to Kerman, the governor acquired his rank and reputation. The state of the Āmeri House declined badly until 1999.  The house was renovated and partially converted into a 5-star hotel, partly into a public museum, with several million dollars invested and 15 years of work. It is now protected by the Cultural Heritage Organisation of Iran. The house spans 9,000 square meters and contains seven courtyards. There are two bathhouses within its walls (hammam), one of which was provided for use by local pregnant women. 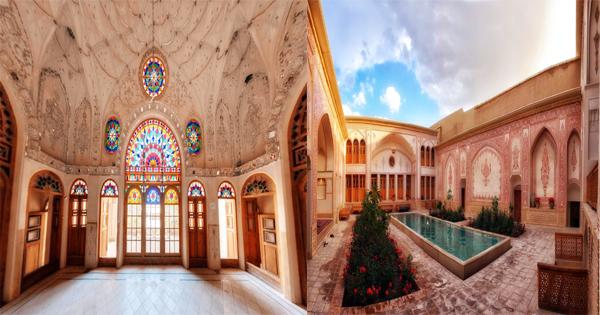 (Inside view and a courtyard in the Āmeri House)

The Āmeri House is a massive 9,000 square meter building (97,000 sq ft). It has hundreds of rooms, two bathrooms, and seven courtyards with fountains and gardens. Ameri House, like all Iranian houses of that period, includes two parts: public or “birooni”, used by visitors and men, and private or “andarooni”, used by women and servants. The house also has many three-door chambers and a seven-door hall called Shahneshins. The Āmeri House wind towers are the largest of the Kashan living houses. Materials such as bricks for the mainframe, mud, and straw for covering walls, thick wooden doors, gypsum façade, and ceiling reliefs, mirrors, tiles, and interior decoration paintings were used in constructing the house. Ponds and porches, parks, and various kinds of flowers and bushes adorn the courtyards. The house is situated in the middle of Kashan, in the city’s old section. Other tourist attractions, such as Borujerdi House, Abbasi House, Tabatabaei House, Toy Museum, Sultan Amir Ahmad Bathhouse, and others, surround it. A 15-minute walk will take you to Agha Bozorg Mosque and Kashan Bazaar. Up until 1999, when renovation work began, the house was in a fragile state of neglect. Portions of the house were expected to be reopened as a high-end conventional hotel after several million USD had been invested. Āmeri House has a museum and many halls to visit, a traditional restaurant and tea house, souvenirs and craft shops. Visitors/travelers may also take a tour with a guide who will teach them all about the house’s history.