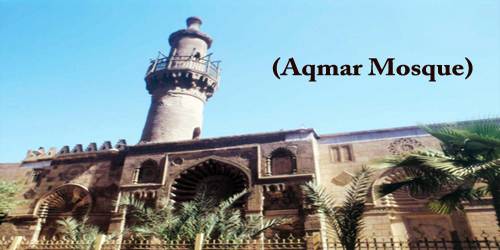 A Visit To A Historical Place/Building (Aqmar Mosque)

The Mosque of al-Aqmar (Arabic: الجامع الأقمر, literally: Moonlit mosque), or Al-jāmiʿ al-aqmar, was built in Cairo, Egypt, as a neighborhood mosque by the Fatimid vizier al-Ma’mun al-Bata’ihi in 1125-6 CE (519 Hijri). Situated on the city’s main artery, the elaborate ornamentation, and design of the mosque is seminal for Cairo’s architecture, especially the way its plan shifts to fit both the qibla orientation and the existing street layout. Similarly to the mosque of al-Azhar (970) and the mosque of al-Hakim (990-1013), formerly named al-Anwar, the name of the al-Aqmar mosque is an epithet of the patron in connection with light. In plan, it is a standard, rectangular hypostyle mosque with a square courtyard, but the facade depth is changed to suit the building behind the current urban scheme dictates. The al-Aqmar mosque was built at the northeastern corner of the Great Palace of East Fatimid and may have served neighborhood and palace citizens alike. Its adjacency to the palace may have been one reason it didn’t feature a minaret; to prevent anyone ascending the minaret from looking down into the palaces of the caliph. In Cairo’s architectural past the mosque has been called a “seminal” building. It is especially noteworthy for two features: its façade decoration and the floor plan design. 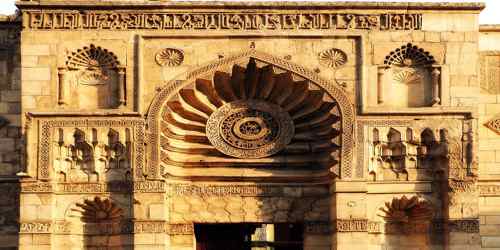 The facade of the mosque (central portion)

The facade is highly decorated with inscriptions and sculptural decoration, made of brick with stone facing. The portal of entry is located inside a keel-shaped arch with a niche. The niche’s interior is fluted, with a central medallion inscribed with the names of Muhammad and ‘Ali, who are both engraved on the building’s chamfered corner. The brick minaret, along with restorations including the mihrab and minbar, was introduced by the Mamluk Amir Yalbugha al-Salimi in 1397. In 1993 the Dawoodi Bohras had thoroughly and completely restored the mosque. This included replacing al-Salimi’s mihrab with a new marble mihrab and replicating the original northern half of the southern half of the exterior facade. This renovation was criticized for sacrificing some of the mosque’s historical elements, particularly it’s interior. While those ground levels make the mosque appear at street level, it was originally constructed over a row of now buried shops. These shops were for the mosque waqf or endowment which would have provided it with tax-exempt revenue. The mosque’s main base inscription runs along the top of the façade, directly under the building’s cornice. Much of the inscription is missing, but what still survives mentions the reigning caliph al-Amir, his father al-Mustaʿli, and the vizier al-Bata’ihi. Recently the mosque has received an extension to restore its facade’s early symmetrical look.