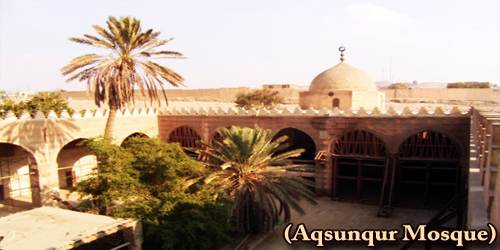 The Aqsunqur Mosque, also known as the Blue Mosque or the Mosque of Ibrahim Agha, was built by the amir, a son-in-law of al-Nasir Muhammad, in 1346-7. The mosque is located in Cairo, Egypt, and is one of the world’s many “Blue Mosques.” It is located between Bab Zuweila and the Saladin Citadel (Cairo Citadel), in the Tabbana Quarter (Darb al-Ahmar district) in Islamic Cairo. It was at prince Shams Al-Din Aqsunqur’s orders. It was, in fact, during the At Muzaffar Hajji Mamluk Sultanate. Aqsunqur had been former sultan Al Nasir Muhammad’s son-in-law. He was one of the latter’s most prominent Emirs. He was a historian of the Medieval Muslim at Macpizi. He noted that Aqsunqur oversaw the entire project and also took part in its actual construction. He had the mosque built in a Syrian architectural style, being the former governor of Tripoli. It constructed around the mausoleum of the late sultan Al-Ashraf Kujuk. Indeed it was built in 1341. The incorporation of the Mausoleum within the mosque accounts for the irregularity of the structure of the building. Aqsunqur’s grave also located within the Blue mosque complex together with those of his sons. By the 15th century, the Aqsunqur Mosque was reportedly in bad condition thanks to the loss of waqf (“religious endowments”) funds from Syria. In 1412 a şadirvan (“ablution fountain”) was inbuilt the middle of the courtyard by the Mamluk emir Tughan. Because funding was low, the Aqsunqur Mosque was used just for Friday prayers and religious holidays. 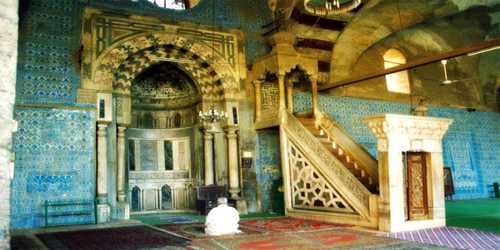 A curious feature of this mosque’s original scheme is its use of cross-vault supporting piers. This is a departure from the standard structural scheme for the interior of Bahri period hypostyle mosques, consisting of arcades formed by marble columns carrying arches that support a flat wooden ceiling. However, Aqsunqur, who is reported by al-Maqrizi to possess himself been the supervisor on the development site, had been governor of Tripoli, Syria, the good mosque of which (1294-1314) follows a hypostyle scheme with cross vaults on piers. Additionally to those vaults on piers, the mosque has arcades on columns supporting a flat wooden ceiling, probably a later addition. The mihrab (“prayer niche” indicating qibla) was constructed in a style of geometric interlace typically found in Mamluk architecture. The design is used in the mihrab’s spandrels. The one-bay brick dome above the mihrab is carried on four brick-built plain squinches. Similar squinches are also used to carry the brick dome over the mausoleum of Kuchuk, but with a pendentive underneath each squinch. By the time this foundation was built, it was old-fashioned to use plain squinches instead of muqarnas pendentives or squinches in the transitional zones of domes. Ibrahim Agha, who seized and redecorated the mosque, installed the blue Iznik tiles on the qibla wall in 1652–64. They were either imported from Istanbul, or from Damascus. The Minaret of the Aqsunqur Mosque was featured in several illustrations from the 19th century. The original minaret of Aqsunqur and the rectangular minaret of al-Ghuri are the only documented Cairene examples of four-story minarets. Aqsunqur’s minaret is one of the few Cairene minarets that are circular in cross-section from the base to the top, and it also shows the earliest dated example of concave chamfering in the transition zone between the base of the square and the shaft. Unlike prismatic triangles, ondulating moldings, and straight chamfering, this transitional feature was unique to minarets, and never used on dome bases.