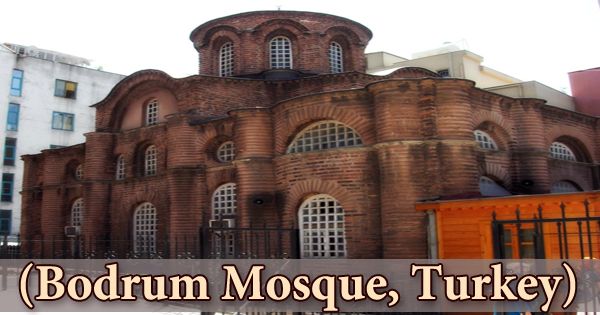 A Visit To A Historical Place/Building (Bodrum Mosque, Turkey)

The Bodrum Mosque (Turkish: Bodrum Camii, or Mesih Paşa Camii named after its converter) was formerly the Church of the Monastery of Myrelaion or “the place of myrrh.” The mosque is a small structure in the Laleli neighborhood of Istanbul, Turkey. The church was known under the Greek name of Myrelaion (Greek: Eκκλησία του Μυρελαίου). Cecil L. Striker’s 1965 archaeological research demolished widely held theories about the church’s history and verified its foundation by Byzantine Admiral Romanus Lecapenus. The Myrelaion church is composed of a nave with four cross vaults around a dome, a sanctuary to the east, and a transverse narthex to the west, and is constructed on a Greek cross or cross-in-square plan. Its crypt was built at the same time and features a cross vault in the middle rather than a dome. During reconstruction, a wooden portico that appeared before the narthex in earlier photographs was demolished. The lovely Byzantine structure is now hemmed in on three sides by new apartment blocks, which is rather incongruous. It is located in Istanbul, in the Fatih district, in the Laleli neighborhood, one kilometer west of the ruins of Constantinople’s Great Palace. As visitors/tourists look into the history of this building, they will come across two extremely ambitious characters who are separated by over 500 years but are somehow connected by their great aspirations, impressive political careers, and involvement in the fate of the Myrelaion building.

The palace of Myrelaion was constructed on top of a huge fifth-century rotunda, the second largest in the ancient world after the Roman Pantheon, with an external diameter of 41.8 meters (137.1 feet). The Myrelaion was converted into a mosque by Grand Vizier Mesih Paşa around the year 1500, during the reign of Bayezid II, after the Ottoman conquest of Constantinople in 1453. The mosque was assigned its name after its substructure (the Turkish word Bodrum means “subterranean vault” or “basement”), but it was also known by its founder’s name. Fires destroyed the house again in 1784 and 1911 when it was abandoned. The narthex is tall, with three bays that are cross-vaulted on the sides and domed in the middle. It has arched windows on two levels in each bay, as well as at each end. From the narthex, three archways lead into the nave. The four piers that support the dome divide the nave into a central hall and aisles. These stone piers are most likely the replacements for marble columns with capitals identical to those in the crypt. The aisles lead to pastoforion, or side spaces, in the form of a clover, which are connected to the sanctuary in the center. Clerestory windows within the four cross vaults and eight windows cut into the dome’s drum provide illumination to the nave from above. There are also several windows on the walls, which are located at two levels. Renovations have culminated in the new appearance of the Bodrum Mosque. However, it wasn’t until 1964-1965 that the Archaeological Museum in Istanbul, in collaboration with the German Archaeological Institute, started systematic renovation and archaeological work. The structure was eventually restored and reopened as a mosque in 1986. The cistern was also rebuilt in 1990, and for a few years, it operated as a shopping mall. The women are now using the cistern to pray. The half-cylindrical buttresses that express the building’s façades characterize its exterior. An exonarthex was also present at one time, but it was replaced by a wooden portico during the Ottoman era. There are three polygonal apses in the structure. The semi-hexagonal apses of the sanctuary and the side rooms dominate the eastern façade. A plain cut stone minaret is attached to the narthex’s northwest corner. The Bodrum mosque, which was once surrounded by a walled precinct, is now threatened by encroaching rows of concrete apartment buildings.