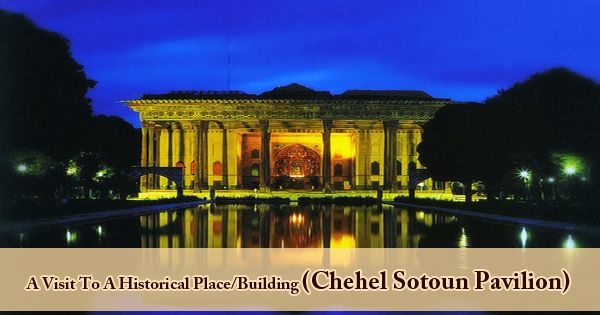 In the center of a wide park in Isfahan, Iran, Chehel Sotoun (Persian: چهل ستون‎, literally: “Forty Columns”), also spelled “Chihil Sutun”, is a pleasure pavilion designed by Shah Abbas II (r. 1642-66). Dignitaries and ambassadors will be welcomed in this palace by Shah Abbas II and his successors, either on the terrace or in one of the stately reception halls. From the illusion that the twenty columns of the front portico are multiplied by the reflecting pool to the south, the name of the pavilion, which literally means ‘Forty Columns’. Initially, the building was built in 1647 and rebuilt after a major fire in 1706. It may have been part of Abbas’ overall urban plan for the town because the site is aligned with the axis of the maidan or central square of Esfahan. It has been identified internationally by UNESCO as one of the most recognized Persian gardens. As with Ali Qapu, the palace includes various ceramic frescoes and paintings. The beautiful paintings by the famous Safavid painter, Reza Abbasi, must be referred to as among the important features of Chehel Sotoun. Many claims that the appellation of Chehel Sotoun is the addition of 20 reflected columns in the water to the actual columns of the palace (forty columns). Many of the ceramic panels were scattered and are now in the west’s possession of major museums. They depict specific historical scenes such as the infamous Battle of Chaldiran against the Ottoman Sultan Selim I, the reception of an Uzbek King in 1646 when the palace had just been completed; the welcome extended to the Mughal Emperor, Humayun who took refuge in Iran in 1544; the battle of Taher-Abad in 1510 where the Safavid Shah Ismail I vanquished and killed the Uzbek King. According to the experts, however, for this kind of architectural style where different columns are used for a structure, Chehel Sotoun is a general term. 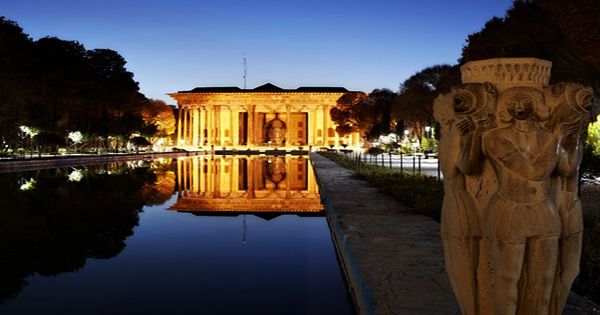 Like many of the famous buildings of Esfahan, the Chehel Sotoun developed as new additions were incorporated into existing structures through accretion. With the somewhat new function of two iwans entering the structure from the sides, the original center of the pavilion, at the rear, was erected. These opened into the chamber of a wide triple-dome. The next phase of development saw two halls flanking an open pond being added. At the front of the house, this formed an iwan-like ensemble with a deep vault of murqarnas adorned with Venetian glass. Some historians state that the main Chehel Sotoun building designed by Shah Abbas II originally contained 40 columns out of which 20 columns were destroyed during a fire incident in the time of Shah Soltan Hosein, the last Safavid King, along with a part of the mansion, and it was later rebuilt in the current form. A more recent painting portrays the victory at Karnal in 1739 of Nader Shah over the Indian Army. In the traditional miniature style, there are also less historical but even more aesthetic compositions which celebrate the joy of life and love. The most surprising feature of the pavilion is the beautifully painted interior, which features a multitude of human figures in contrast to the general Islamic architecture, including many battle scenes and audiences conducted by the Shah with rulers bordering the empire’s eastern part.