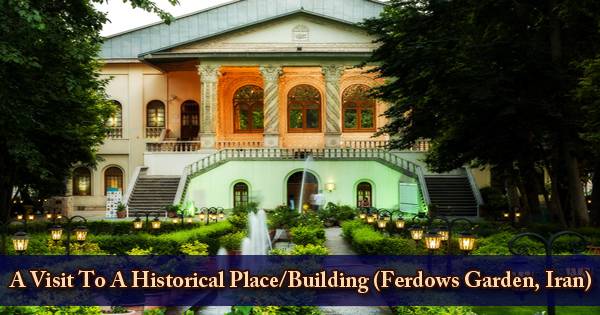 A Visit To A Historical Place/Building (Ferdows Garden, Iran)

Ferdows Garden (Persian: باغ فردوس‎ Bāq e Ferdows) is a historical complex between Zafaraniyeh and Jafar Ābād, situated in Tajrish, Shemiran, Northern Tehran, Iran. The complex dates back to the reign of the dynasty of Qajar and includes a mansion that has housed the Iranian Cinema Museum since 2009. The complex was originally designed by Hājj Mirzā Āqāsi, Prime Minister of Mohammad Shah Qajar, and was previously known as Mohammadie. It was used by the Qajar family as a summer home. In September 1848, Mohammad Shah Qajar died here, and in subsequent years, the complex became disused. The term pairidaēza (Avestan) at the time of the Achaemenid Empire applied to extensive gardens established all over the empire. It derived from Proto-Iranian paridaiźa, literally meaning “circular boundary”. Modern Persian ferdows (فردوس) and Pardis (پردیس) are variants of the same word that occurred in Greek as parádeisos (παράδεισoς) and entered paradise in English. As a synonym for the Hebrew word gān, Pardēs meaning “the Garden of Eden”. The ownership of the compound was transferred to Dust-Ali Khan (Nezām od Dowle-Moayyer ol Mamālek) during the reign of Naser ed-Din Shah (1848–1896), who restored the palaces and called them Ferdows. Later, his son, Dust-Mohammad Khan, the son-in-law of Naser od Din Shah, designed a new building on the southern edge of this structure, using the collaboration of architects from Esfahan and Yazd, giving it the name Rašk e Behešt, literally “Envy of the Paradise.” 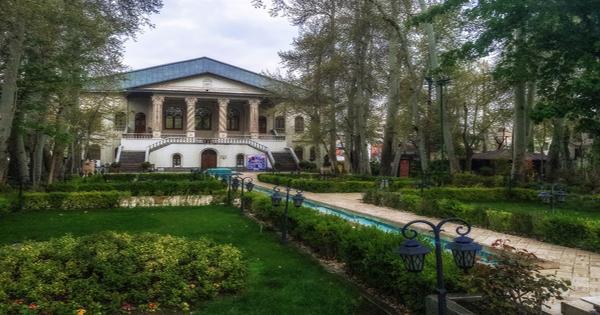 A few hands modified the complex, and the older mansion was finally demolished. The remaining framework was then purchased by Mohammad-Vali Khan Tonekaboni, the chief of the Revolutionary Constitutionalist Movements from the northern regions of Gilan and Mazandaran in Iran. He added to the complex new pools and fountains and regenerated the aqueduct which had fed the garden with fresh water in earlier years. The new garden gate dates from this period as well. Over the years, the stately mansion has been rented to various ministries. In 1937, a primary and a secondary school, Shapour schools, were housed in this complex by the Ministry of Education. Ferdows Garden acted as a training center for filmmaking after the 1979 Revolution until 2002. It has been the seat of the Museum of Cinema since 2002. An Iranian film written, produced, and directed by Siamak Shayeghi, with Reza Kianian, Ladan Mostofi, and Azita Hajian in the main roles, Ferdows Garden, 5 o’Clock in the Afternoon (2005), refers to the public park from where the main mansion is visible.