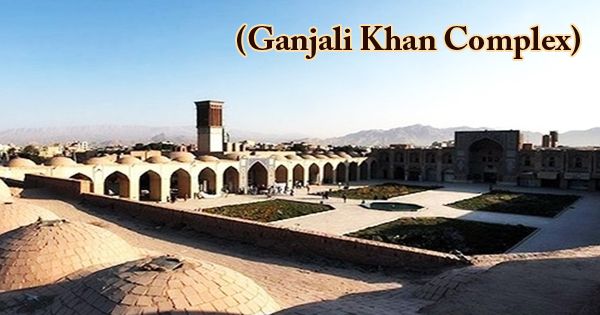 A Visit To A Historical Place/Building (Ganjali Khan Complex)

The Ganjali Khan Complex (Persian: مجموعه گنجعلیخان‎ – Majmou-e-yeh Ganjali Khan) is located in the center of ancient Kerman, Iran; it is a Safavid-era building complex. Ganj Ali Khan, who ruled the provinces of Kerman, Sistan, and Kandahar from 1596 to 1621 under Safavid Shah Abbas I, founded the complex; so many architectural sites were built under his direction. In regional growth, he had an important role. A college, a square, a caravanserai, a bathhouse (hammam), an Ab Anbar (water reservoir), a mint, a mosque, and a bazaar make up the complex. The brick arches, tilework, pool, and lush landscape of Ganjali Khan Square are characterized. The square is surrounded on three sides by a bazaar and on one side by the Ganjali Khan Monument. The exact date that these places were constructed is indicated by a number of inscriptions found within the complex. Mohammad Soltani from Yazd was the architect of the complex. Ganjali Khan Complex in the city center, Ganjali Khan Caravanserai on Yazd-Kerman Road, Hoz Khan on Kerman-Mashhad Road and some Qanats (= aquaduct) in the city are some of the public architectural sites that were developed in Kerman under the order of Ganjali Khan. Any of these buildings sustained irreparable damage during the Geostrategic Military Missions of Agha Mohammad Khan. The Ganjali Khan Bazaar is a three-kilometer-long road with the Arg Gate, the Kerman entrance on one end, and the Vakil Mosque Gate on the other. The bazaar consists of caravanserais, rows of various occupations, and multiple shops. 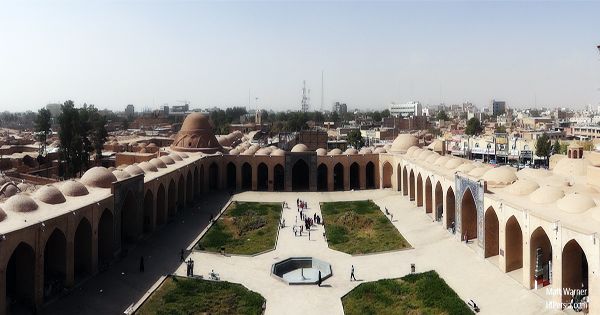 The complex is based on a ninety-nine meter by fifty-four-meter wide public square aligned with Vakil Bazaar running east-west to its south; an area of 11,000 square meters also covers the complex. To the north, south, and west, the square is enveloped by bazaar arcades and is flanked to the east by the Ganjali Caravanserai. There are four mosques on the four corners of the square, of which three are preserved. The most beautiful one is the mosque on the eastern side which is an artistically decorated museum. Soltan Mohammad Memare Yazdi was responsible for the complex architecture. The architectural style of this complex is in the style of Isfahani. Various portions of the complex are:

Ganjali Khan Bazaar is situated in Ganjali Square’s southern section. The bazaar is adorned inside with beautiful plasterwork and wall paintings and they are all well-preserved even though they are 400 years old. The bazaar is 93 meters long and is linked through 16 iwans and vaults to Ganjali square.

The Ganjali Khan Bathhouse is situated on the south side of Ganjali Khan Square and was built in 1611, in the middle of the Kerman Grand Bazaar. A 1,300-square-meter area spans the bathhouse and includes a façade, entrance hall, changing room, Hashti (vestibule), Garm Khaneh (hot chamber), pool, private bath, and boiler room. As well as moqarnas, tilework, and stucco relief decorations, the bathhouse has wall paintings. In 1971, the bathhouse was turned into a Museum of Anthropology. There are also lifelike sculptures in the closet section and primary bath yard. These statues were modeled in 1973 by the Faculty of Fine Arts of Tehran University and then transferred to this museum.

Ganjali Khan Mosque was built in 1598 under Ganjali Khan’s command. With a dodecagonal lightwell at its middle, it has a square-shaped dome chamber. Moqarnas and other decorations common in the Safavid era adorn the underdome. With a 5.25*5-meter area, the mosque has a small Shabestan. The porch view is fairly plain. There are abstract plaster shapes drawn on the porch. The floor is made of stone above the wooden door; there is a rocky inscription written on it with some respect for King Abbas. The dome has 12 skylights on it. Drawings, plastering works, and Mogharnas decorate the mosque. The mosque has been rebuilt in recent years, and these years are only for tourist purposes and do not serve as a mosque where Muslims can no longer pray.

An octagonal, four-iwan structure built on the northern side of Ganjali Khan Square is the Ganjali Khan Mint. On either side, this Mint has elaborate stucco decorations, a central dome, and balconies. Until the end of Ganjali Khan’s time in power, the Mint produced coins. The Mint is currently the location of Kerman’s Coin Museum.

One of Kerman’s major educational centers is the Ganjali Khan School and Caravansarium. The school is situated on the eastern side of the square and was once a popular school that over time became a caravan. Mohammad Soltani Yazdi was its architect. The date 1589 is engraved on the inscription on the doorstep. The art department has been changed over the years.