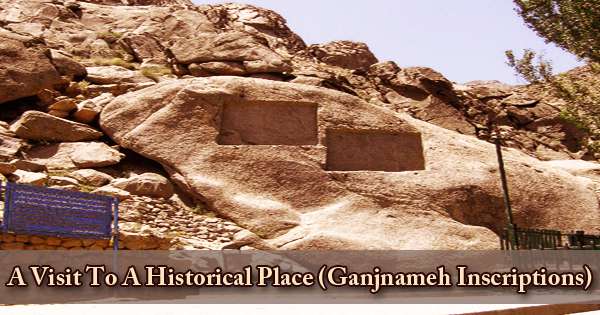 The Ganjnameh (Persian: گنجنامه‎, romanized: Ganjnāme, lit. “Treasure Book”) are a series of cuneiform characters written in three languages (former Persian, Elamite, and Babylonian), placed on a rock face on Mount Alvand, about five kilometers from modern-day Western Iran’s Hamadan (former Ecbatana). Two trilingual Achaemenid cuneiform inscriptions are housed at the site. On the order of Achaemenid King Darius the Great (r. 522-486 BC) and the one on the right by his son, King Xerxes the Great (r. 486-465 BC), the inscription on the upper left was formed. It includes both historical and natural tourist attractions that delight its tourists. The inscriptions of Ganjnameh (literally “Treasure Book”) are so-called because its cuneiform rock carvings were once assumed to be cryptic clues leading to Median treasure caches. The French painter and archaeologist, Eugene Flandin, who was accompanied by Pascal Coste, first studied them in-depth. Following their work, a British explorer, Sir Henry Rawlinson, used the inscriptions as a sort of Rosetta stone to decode the era’s cuneiform characters. The two Ganjnameh inscription panels, sculpted in stone in 20 lines on a granite rock over a creek, measure 2 × 3 m each. The contents of the two inscriptions are similar, written in Old Persian, Neo-Babylonian and Neo-Elamite, except for the distinct royal name; Ahura Mazda receives praise, and lines and conquests are mentioned. On two rocks on the other side of the town, the English and Persian translations of these inscriptions are engraved. These inscriptions were registered in 1931 on Iran’s national heritage list. 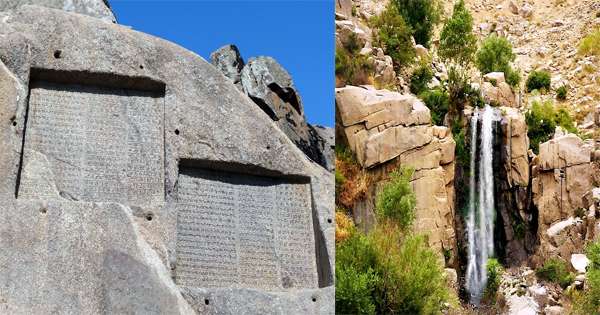 (Cuneiform Inscriptions of Darius and Xerxes in Ganjnameh and Ganjnameh Waterfall)

The inscriptions proved to belong to the era of Darius I (521-485 BCE) and Xerxes I (485-65 BCE), refuting earlier myths that the inscriptions represented the place of the buried treasure, hence the name Ganjnameh, or ‘epistle of treasure.’ Just to the east is the rock on which the inscriptions are engraved. According to Stuart C. Brown, this mountain was apparently the main “east-west pass” through Mount Alvand in the pre-Hellenistic period. Ecbatana functioned as the summer capital during the Achaemenid era due to its high elevation and nice weather. The site was named after local residents, who assumed the inscriptions held the secret code for a hidden treasure. With Persian clarification and English translation, two modern contemporary carved tablets have been placed in the parking lot of the site. One of the province’s most significant waterfalls, near the city of Hamadan and at the tail end of the Abbas Abad Valley recreational park, is the Ganjnameh waterfall. From a height of around 12 m, this waterfall flows down. And it is known as the water of Abbas Abad. Its average capacity is 200 liters/second. In the vicinity of the Ganjnameh Inscriptions, this waterfall is also en route to the track from where the heights of the Alvand Mountains can be accessed. In 2008, this waterfall was registered on the list of National Heritage Sites.