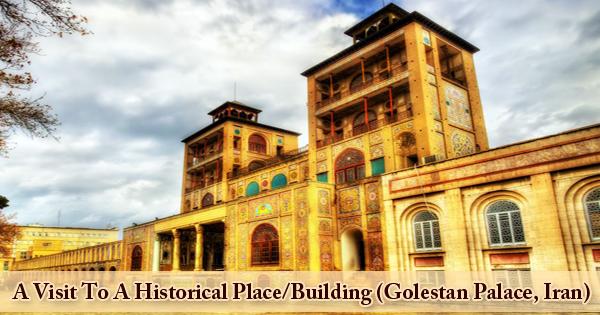 A Visit To A Historical Place/Building (Golestan Palace, Iran)

In Tehran, Iran, the Golestan Palace (Persian: کاخ گلستان‎, Kākh-e Golestān) dates back to the Safavid era. A fine example of Persian art, culture, and architecture is this great palace. It is the precious gem sitting in the heart of Tehran bearing Pahlavi kings’ memories from the Safavid era. It is the capital’s highlight and attracts many tourists from Iran and abroad on a regular basis. It comprises several different buildings and halls in its current form, including the following: the Imarat-i Takht-i Marmar, (also called the Marble Throne Building, Iwan-i Takht-i Marmar, or Iwan-i Marmar, 1759), the Khalvat-i Karim Khani (Karim Khani Palace, 1759), the Talar-i Almas (Diamond Hall, 1801), the Imarat-i Badgir (Wind-catcher Building, 1813), the Talar-i Aaj (Hall of Ivory, 1863), the Shams al-Imarat (Shams-ol Emareh, or Sun Building, 1866), the Talar-i Salam (Reception Hall, 1874), the Mouze-i Makhsous (Special Museum, 1874), the Talar-i Ayeneh (Hall of Mirrors, 1874), the Imarat-i Brelian (Talar-i Brelian, or Hall of Brilliant Diamonds, 1874), the Kakh-i Ab’yaz (White Palace, 1890), and the Chador Khaneh (Tent House). During Naser al-Din Shah Qajar kingdom, the main modifications were made. He was the first Iranian king who traveled a lot to the western countries and was fascinated by their architecture because his kingdom was long (49 years) and so he tried to construct similar structures in Tehran. 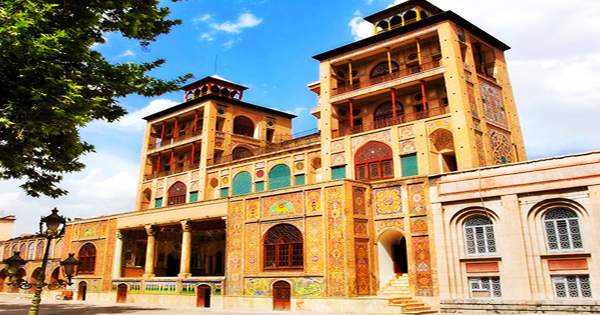 The Gulistan Palace Complex is bordered by the Ministries of Finance and Justice on the north, Naser Khosrow St on the east, Davar Street on the west, and Panzdah-e Khordad Ave is one block along its southern side. In the heart of old Tehran, which itself is framed by Shahr Park on its northwest side, Pamenar Street on its east side, and Tehran Bazaar on its southwest side, lies the Gulistan Complex. Some important moments in Iran’s history have been witnessed by the Golestan Palace, such as the Constitutional Transition, the coronation of the first and second Pahlavi dynasties. Golestan Palace served as a venue for official events and receptions during the Pahlavi period. Some of its buildings were demolished between 1925 and 1945 by Reza Shah, who strongly believed in Iran’s modernization and development. The old-looking palace did not fit the emerging city’s new appearance. In its present state, the complex consists of two linked gardens, a smaller one to the west and a larger one to the east, and the buildings surrounding them. Some of the key points of the palace are the Marble Throne, Brilliant Hall, Ivory Hall, Mirror Hall, and Diamond Hall. A water channel runs along the central axis of the garden. The larger garden here referred to as the Gulistan Garden, is approximately square in plan (it is slightly longer along its east-west axis) and with a small degree of northwest-southeast rotation. Visitors can also find interest in the Museum of Gifts with some rare objects, the display of European paintings in the Pond House and Iranian paintings in the Picture House, except for the interior of the Golestan Palace, and the archive of photography showing the first experience of using photographic cameras inside the walls of the Golestan Palace. The Golestan Palace, in its present state, is the culmination of around 400 years of building and renovation. The Golestan Palace was nominated for the status of UNESCO World Heritage Site in 2013 and was then granted.