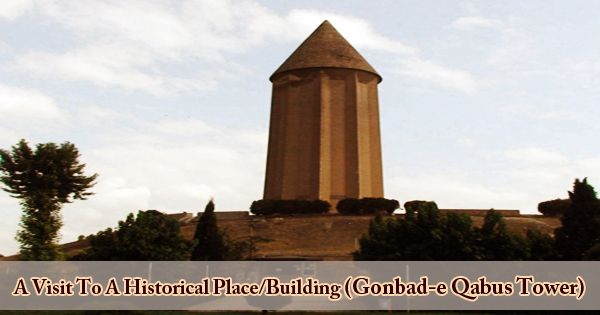 A Visit To A Historical Place/Building (Gonbad-e Qabus Tower)

One of the excellent architecture of the Islamic period dating back to the 4th century AD is the historical tower of Gonbad-e Qabus. Since 2012, it has been a monument in Gonbad-e Qabus, Iran, and is a UNESCO World Heritage Site. It marks the grave of Qabus, the ruler of Ziyarid (r. 978-1012), and was built in 1006/7 during his lifetime. It is a tower with a conical roof, flanged, cylindrical, slightly tapering, situated on a small hill. The Tower has a harmoniously reinforced structure, despite the minimal use of decorative elements. It is a cylindrical tower of a tomb which reaches c. 61 meters (200 feet) and can be seen from about 30 kilometers (19 miles) away; named after the monument is the eponymous town. The tower is the world’s tallest brick tower, built-in 375 Solar Hijri at the time of Qabus-ibn Wushmgir on a hill 15 meters above ground level. The tomb takes its name from the ruler of Ziyarid, Qabus b. With Voshmgir. Qabus was an astrologer, poet, calligrapher, and patron of many authors and scholars, including Ibn Sina (Avicenna) and al-Birunii (Aliboron). He reigned in Gurgan until his murder in 1012, five years after the building of the tomb began. There are also other different accounts, however, which say that the Qabus grave may not be in this gunbadkhanah. According to Oleg Grabar, considered a masterpiece of Iranian architecture, it achieves an “almost perfect balance between a purpose (princely glory beyond death), a form (cylindrical tower transformed into a star), and a single material (brick).” The Gonbad-e Qabus Tower is northern Iran’s best-known tower tomb and has been featured in several publications. 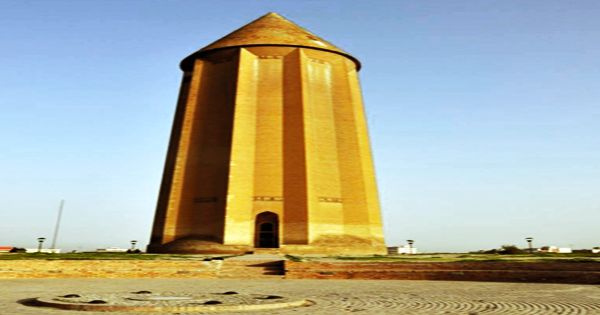 This tower is the only surviving structure from the period when Jorjan (Gorgan) was the capital of art and science that was destroyed during the invasion of the Mongols. Gonbad-e Qabus is, because of its aesthetic geometry, a beautiful masterpiece of Islamic architecture. The tower has a decagon shape and is 17 m in diameter. The conic dome forms Phi’s popular and golden ratio equal to 1.618 and is located on walls of 3 m width. With an outer conical roof and an inner hemispheric shell, the dome is double-shelled. Gonbad-e-Qabus consists of two parts: the base of the building and the star-shaped conical dome of its body. The building is made entirely of bricks. The tower’s body is made of firm, unglazed, fired bricks that are now very “weathered and decolored.” The height of the tower is 37 meters, and another conical vault is 18 meters high. The portal’s half-vault rests on two rows of primitive muqarnas made of stone. There is no access to the roof, which, on the eastern side, has a small opening, and no underground chamber. Gonbad-e-external Qabus’s circular body consists of 10 Tarks bricks (like 10 pointed star). The Tarks are located at similar distances from each other across the tower. The installation of The Tarks starts from the base and continues up to the dome. The Gonbad-e Qabus tower, however, differs because of its “extraordinary height” from other examples. Taking into account its conical roof, the tower measures c. 50 meters (160 feet) above ground level; that’s three times its outside diameter. In the entrance gate arch, there is a stalactite, which seems to be in the first stages of such architectural and stucco decoration. Two Kufic inscription rows have been built to look like a belt across the building’s outer body. In the Razi style of architecture, the use of Kufic calligraphy, which is very plain and legible, was first observed and then used in the inscription of buildings. This tower is a prototype for the architectural and technical development of tomb towers in the Islamic age of Iranian architecture. Although the tower is supposed to be the mausoleum of Qabus, similar to the other tomb towers of northern Iran, there is nobody buried inside. According to legend, Qabus was buried in a glass coffin, suspended by chains from the roof. Reports indicate that inside the dome, the glass coffin of Qabus was suspended, the morning sun striking his body through the eastern opening. The Mausoleum of Qabus is currently the only remaining relic of the ancient city of Gurgan, which flourished under Ziyarid rule as one of the largest academic centers until collapsing into ruins during the invasion of the Mongolians. This great beauty has become one of the UNESCO World Heritage Sites in Iran because it is the world’s tallest pure-brick structure.