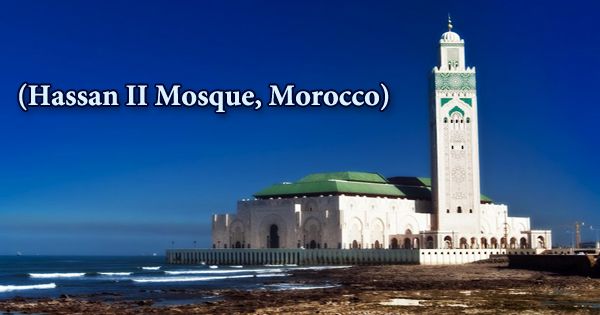 A Visit To A Historical Place/Building (Hassan II Mosque, Morocco)

The Hassan II Mosque (Arabic: مسجد الحسن الثاني‎, French: Grande Mosquée Hassan II), is a mosque in Casablanca, Morocco, and is considered the largest mosque in Morocco and the third largest mosque in the world, after the Mosque of Masjid Al-Haram (Grand Mosque) in Mecca and the Mosque of Al-Masjid Al-Nabawi (Prophet’s Mosque) in Medina. Hassan II holds the distinction of having the largest minaret in the world, although it is actually the 7th largest mosque in the world. At 210 meters (690 ft), the minaret is the second tallest minaret in the world. Completed in 1993, it was designed under the guidance of King Hassan II by Michel Pinseau and constructed by Moroccan artisans from around the kingdom. The minaret is 700-feet tall, standing over the Atlantic Ocean, topped with a spotlight that shines east towards Mecca. Almost lighthouse-like in its position, it is also built directly on the Atlantic Ocean on reclaimed land, which was done with intention by the architect to recall a verse of the Qur’an stating that “the throne of Allah was built on water.” It is a display of the finest Moroccan craftsmanship: ample hand-carved stone and wood, complex marble flooring and inlay, gilded cedar ceilings, and exquisite zellige (geometric mosaic tilework). It is one of two Moroccan mosques open to non-Muslims; outside of prayer times for modestly dressed tourists, multilingual guided tours are conducted. There’s also a small museum where the craftwork involved is displayed. A maximum of 105,000 worshipers will gather together for prayer: 25,000 inside the hall of the mosque and 80,000 outside the mosque. The floor is made of glass, so it is possible to see the ocean below and worshipers can pray over the water. The walls are of marble made by hand. The roof of the Mosque is retractable so that the stars can be seen at night by worshippers. With the exception of the white granite columns and glass chandeliers imported from Murano, near Venice, almost all the materials that make up the mosque come from Morocco.

The main volume, consisting of the prayer room on the ground floor and the ablution room and a public hammam in the basement with its own entrance, is 200 m long, 100 m wide, and 65 m high structure. The scale of the prayer hall and its intricate decor is absolutely magnificent. To work on the mosque, a team of more than 6000 master craftsmen was assembled, delicately carving intricate patterns and designs in fragrant Middle Atlas cedarwood and Agadir pink granite. On the exterior facades, titanium, bronze, and granite are included. The house is partly constructed on land and partly on the ocean. This position was achieved by building a platform connecting a natural rock outcrop recovered from the sea, where a swimming pool had previously been situated. Two wide breakwaters were also designed to shield the mosque from the erosive action of ocean waves that can reach a height of up to 10 meters (33 ft). To shield the foundations of the pillars from the sea during the construction phase, a temporary pier 800 meters (2,600 ft) in length had to be erected. Its environmental value is that it enjoys a new breeze from the sea and is free of noise and pollution. The idea behind the construction of the mosque started with the death in 1961 of King Mohammed V. Originally, construction was expected to be completed in 1989 ready for the 60th birthday of Hassan II; however, the building was not completed on schedule, which delayed the inauguration. The official/formal inauguration was chosen to be the 12th Rabi’ Al-Awwal of the year 1414 of the Hijra, corresponding to 30th August 1993, which marked the eve of the anniversary of Prophet Muhammad’s birth. On the ground floor is the prayer hall. The central hall is centrally heated and offers stunning views of the Atlantic Ocean from underwater. The decorations in the hall are intricate and beautiful, made possible by the involvement of 6000 Moroccan master craftsmen working on it. The prayer hall is constructed on a rectangular plan with a length of 200 meters (660 ft) and a width of 100 meters (330 ft) and three naves perpendicular to the wall of the Qibla. The hall’s central nave is 40 meters (130 ft) and wider than the side nave, which is 27 meters (89 ft) high. The 13 meters (43 ft) high pillars are square in shape with interlocking columns and a series of pillars are joined by cruciforms. Light from the glass gates on the northern wall often illuminates the prayer hall. Following the mosque’s completion, the museum opened its doors to the public. As well as unused architectural elements of the mosque, such as carved stucco, painted wood ceilings, and zellij walls, it presents art pieces from various traditional Moroccan arts. During regular prayer hours and special Friday services, the Hassan II Mosque is open to Muslims. The mosque is one of the few mosques available to non-Muslims, but guided tours are the only way to access the mosque and at particular times for non-Muslims. There is no entrance fee for being outside, but there is an entrance fee if any visitors/tourists want to see the interior of the Hassan II Mosque with a guide.