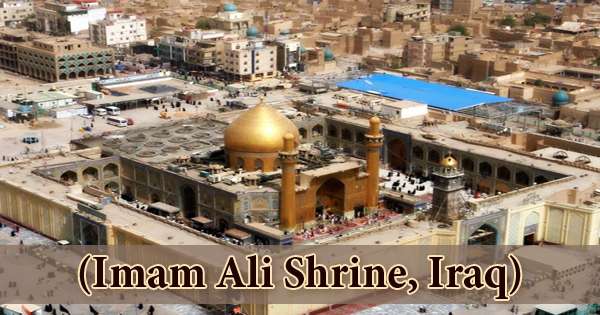 A Visit To A Historical Place/Building (Imam Ali Shrine, Iraq)

In the heart of Najaf Old Town, Iraq, the historical Islamic pilgrimage town, the Sanctuary of Imam ‘Ali (Arabic: حَرَم ٱلْإِمَام عَلِيّ‎, romanized: Ḥaram al-ʾImām ʿAlī), also known as the Mosque of ‘Ali (Arabic: مَسْجِد عَلِيّ‎, romanized: Masjid ʿAlī), is located. It is a Muslim Shi’ite mosque housing the tomb of ‘Alī ibn Abī Tālib, Muhammad’s cousin and the first Shi’ite Imam after him, and the fourth caliph of Sunni Rashid. It is one of the great icons of Islamic religion and architecture and is considered by many as the finest masterpiece of Iraqi heritage, particularly for the Shi’a. The shrine was first built over the grave of Ali by the Iranian king, the Daylamite Fannakhosraw Azod ad Dowleh, in 977. It was rebuilt by Seljuk Malik Shah I in 1086 after being destroyed by fire and rebuilt again by Safavid Shah Ismail I shortly after 1500. According to Shi’ite belief, the ashes of Adam and Nuh are buried next to Ali in this mosque (Noah). Millions of pilgrims visit the Shrine each year and pay homage to Imam Ali. With 7,777 tiles of pure gold covering the dome and two 35-meter-high golden minarets, each consisting of 40,000 gold tiles, the mosque is resplendent in gold. Within, the mosque is adorned with the opulence typical of Shia mosques, with mirrored tiles and hammered silver walls reflecting neon lights. An often-looted treasury of precious items donated over the years by sultans and other devotees is sheltered in the mosque. The historical stages of the shrine’s emergence, and the events taking place within it, must be clarified. Local decision-makers have critically prioritized how to accommodate and accept tourists to the Holy Shrine without paying attention to the preservation of its cultural heritage and local identity: this has eventually led to the removal of many significant historic buildings and features surrounding the Shrine.

In 1326, Ibn Battuta visited the shrine, stating that it was “carpeted with different kinds of silk carpets and other materials, and contains gold and silver candelabras, large and small.” Among the three tombs, “are gold and silver dishes, containing rose-water, musk, and various kinds of perfumes. The visitor dips his hand in this and anoints his face with it for a blessing.” The Shrine has a long history, beginning in 786 when a small room and a dome made of clay with four portals were built as the first structure. Later, around the tomb of Imam Ali, perimeter walls were added in the last two decades of the 9th century, containing rooms used for study and rest. The Shrine has been frequently reconstructed since 900 A.D, and the largest building was constructed in 979. This building stood for over five centuries until being totally demolished in a fire. The Shrine, however, remains a central Najaf landmark and is generally religiously important to Islamic cities. This paper is structured around two main sections and, in terms of its historical development and importance, the first section discusses the historical and cultural context of the Shrine. The second part focuses on the external forces (national) and internal forces (local) that have served as a building on the Shrine. A fire destroyed the shrine in 1354, but Jalairid Sultan Shaikh Awais Jalayir rebuilt it around 1358. The present design dates from the period of Safavid when a new design was suggested by Al-Shaekh Al-Bahaee in 1621. It was built in 1630, rebuilt with the dome, and enlarged with the Shrine. The shrine was subsequently closed for two years, officially for repairs. Saddam Hussein also deported a significant number of the area’s inhabitants who were of Iranian descent to Iran. The outer wall, the 5 main doors, the courtyard (Sahan), the golden Iwan, the two golden Minarets, the Shine clock, the golden dome, and Imam Ali’s tomb are the present main architectural features of the Shrine. They all together form a distinctive design that has ample significance to become a focal point for the city’s identity. The mosque is well known because of its wide dome. There are two minarets near the wide entrance. 7777 brick slabs painted in gold are crowned with the wide dome, there are also turquoise mosaics covering the side and back walls. The inner sanctuary is a wide chamfered-edge cube topped with an onion-shaped dome 42 m (138 ft) in height and flanked by twin minarets 38 m (125 ft) tall. At least 8 million pilgrims visit the site annually on average, which is expected to rise to 20 million in years to come.