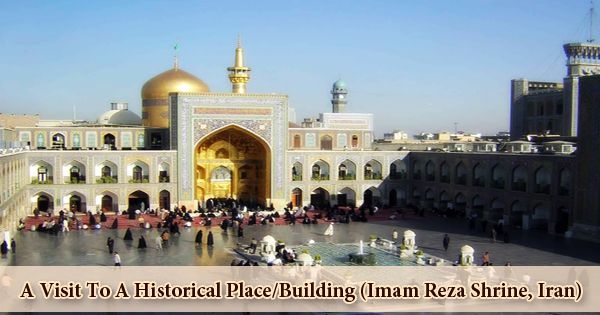 A Visit To A Historical Place/Building (Imam Reza Shrine, Iran)

The Holy Imam Reza shrine (Persian: حرم امام رضا‎), is Iran’s largest, most important and prominent religious center, consisting of the most Persian-Islamic architectural features that are visited every year by many pilgrims from Iran and around the world. The place was in Mashhad, Iran. The complex was built on the site of the eighth tomb of the Imam, in the small village of Sanabad, at the time of his death in 817. The town acquired the name Mashhad, ‘Place of Martyrdom’ (used for any Muslim martyr’s burial place) in the tenth century, and became the most sacred site in Persia. It is the world’s largest mosque by area. The Goharshad Mosque, a museum, a library, four seminaries, a graveyard, the Razavi University of Islamic Sciences, a dining hall for pilgrims, large prayer halls, and other buildings are also included within the complex. Although an inscription from the early fifteenth century is the earliest dated construction, historical references suggest buildings on the site prior to the Seljuk era, and an early thirteenth-century dome. The holy body of Imam Reza (PBUH) buried in the garden of Hamid Ebn Ghahbe beside the tomb of Abbasid Khalife Harun with the martyrdom of Imam Reza in Tous in 203 AH and in fact, the first building of this holy shrine was the monument of Harun Alrashid then the new holy shrine set up on that wall and Tous changed to Mashhad-Al-Reza. According to a 2007 report, the complex is a tourism center in Iran and has been described as “the heart of the Shia Iran” with 25 million Iranian and non-Iranian Shias visiting the shrine every year. The Astan Quds Razavi Foundation operates the complex and is currently led by Ahmad Marvi, a prominent Iranian cleric.

The largest period of building under the Timurids and Safavids took place following periods of alternating devastation and reconstruction, including the irregular interest of the Seljuk and Il-Khan Sultans. The site received considerable royal patronage from Timur’s son, Shah Rukh, his wife, Gawhar Shad, and Tahmasp, Abbas, and Nader Shah, the Safavid Shahs. The sanctuary itself covers an area of 267,079 square meters (2,874,810 sq ft), while the adjacent seven courtyards cover an area of 331,578 square meters (3,569,080 sq ft), totaling 598,657 m2 (6,443,890 sq ft). In the Imam Reza sanctuary, the Dust Clearing ceremony is celebrated every year. Shrine means a square position consisting of the religious monument, such as the dome, the stone of the shrine, the sacred shrine. The holy shrine of Imam Reza is a complex of Shrine, dome, final, Ravagh, Bast, courtyards, porches, mosques, Saqakhaneh, which are the architectural decorations that are most worthwhile. The shrine was extended with new courts (Sahn-e Khomeini, Sahn-e Jumhuriyet Islamiye), a library, and an Islamic university under the rule of the Islamic Revolution. In addition, this extension reverses Pahlavi Shahs Riza and Muhammed Riza’s ‘beautification’ scheme, in which all structures adjacent to the shrine complex were cleared to form a wide green lawn and circular boulevard, isolating the shrine from its urban background. On the reverse of the Iranian 100 Rials coin, issued since 2004, the shrine is depicted. In 1911, the entire complex was badly damaged, but it was restored again after a while by Hussein Mirza Nayyir al-Dawla, the governor of Khorasan. In 1347/1928, when the Falakah (round open space with a radius of 180 meters from the top of the Dome) was built, there were some significant changes around the complex. Underneath a golden dome, with elements dating back to the twelfth century, is the tomb chamber. The chamber is decorated with a given tilework dated from 612/1215, above which in the nineteenth century the wall surfaces and a muqarnas dome were executed in mirror work. External hallways named after scholars lead to the inner areas of the mosque from the courtyards. The tomb is surrounded by several other chambers, including the Dar al-Siyada and Dar al-Huffaz, both commissioned by Gawhar Shad. These two rooms, located on the southwest side of the complex, provide a transition between the tomb chamber and its congregational mosque. The Bast hallways lead towards a total of 21 internal halls (Riwaq) which surround the burial chamber of Ali al-Ridha. A mosque dating from the 10th century, known as the Bala-e-Sar Mosque, is also adjacent to the burial chamber. The assemblage of courts and buildings surrounding the inner chambers includes the Gawhar Shad Mosque, the Madrasa Do Dar, the Sahn-e Engelab or Sahn-e Atiq (the old courtyard), and the Sahn-e Azade or Sahn-e Jadid (the new courtyard); These are described in individual entries.