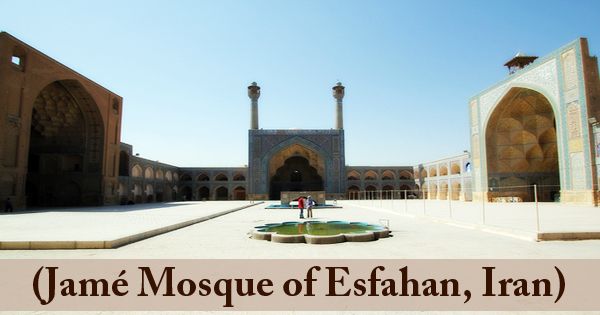 A Visit To A Historical Place/Building (Jamé Mosque of Esfahan)

One of Iran’s premier architectural landmarks is the Jāmeh Mosque of Isfahān or Jāme’ Mosque of Isfahān (Persian: مسجد جامع اصفهان‎ Masjid-e-Jāmeh Isfahān). Also known as the Atiq Mosque (مسجد عتیق) and the Friday Mosque (مسجد جمعه), this mosque was the great congregational mosque (Jāmeh) of Isfahān district, in the province of Isfahān, Iran. Originally built in 772 during the reign of the Abbasid era’s Al-Mansur Caliphate, the mosque has evolved over the centuries to become the sprawling ensemble seen today by accretion. It exhibits an internal harmony derived from the basic four-iwan architecture facing a wide central courtyard, amid the almost organic growth of the mosque. The Friday Mosque of Isfahan is a prominent architectural expression of the Seljuk rule in Persia, situated in Isfahan, 340 km south of Teheran (1038-1118). The Isfahan Grand Bazaar can be found on the southwest wing of the mosque. Since 2012, it has been a UNESCO World Heritage Site. In 1051, Isfahan became the capital of the Seljuks, who in the eleventh century arrived from central Asia in Khwarazm and Transoxiana. The Sunni defenders were preparing for the restoration of the Abbasid Caliphate. Tughril Beg’s conquest of Isfahan elevated the prestige of the city, which was reflected in the rich architectural projects reflecting the strong empire of the Selyuk, the first of which was the Friday mosque. The erection of a wide dome located in front to the north) of the mihrab of the qibla wall was a crucial addition to the mosque. It was commissioned by Nizam al-Mulk, a Vizier under the ruler of Selyuq, Malik Shah Shah (r. 1072-92). The south dome was designed in 1086-87 by Nizam al-Mulk, the famous visitor of Malik Shah, to house the mihrab, and was larger than any dome known at that time. A year later, the North Dome was designed by Nizam al-competitor, Mulk’s Taj al-Mulk. This domed chamber’s purpose is unknown. While situated along the north-south axis, it was located beyond the mosque’s boundaries. 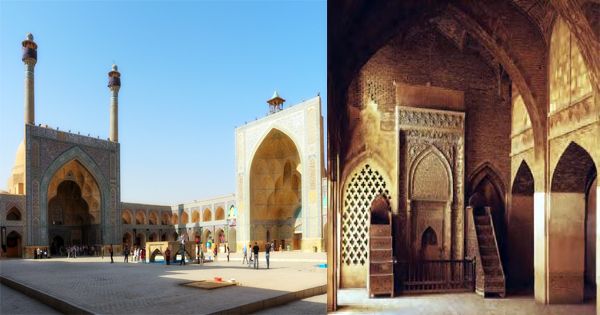 Although the dome of Nizam is larger and enjoys the distinction of housing the principal mihrab of the mosque along the qibla wall, most scholars accept that the superior architecture is the north dome. According to Robert Byron, the north dome “…is really a tomb-tower incorporated into the mosque…” in form though not in function. Of note is the elaborately carved stucco mihrab commissioned by Mongolian leader Oljaytu in 1310, situated inside the western arcade in a side prayer hall. With the addition of muqarnas, glazed tilework, and minarets flanking the south iwan, the Safavid action was mainly decorative. Unlike the rest of the mosque, with its emphasis on lofty shapes and intimidating scales, the mihrab reveals a chamber situated on the west side of the iwan in a fairly small space with minute attention to detail. Later on with his new maydan, established in 1602, Safavid ruler Shah Abbas would supersede the Seljuk center, essentially shifting the city’s focal point further south. The Friday Mosque is therefore considered by many contemporary architectural historians to epitomize the Seljuk in the early Safavid era and the center of what we might call the city of “pre-Abbas”. With repairs, reconstructions, and additions, the cupolas, and piers that shape the hypostyle region between the iwans are undated and varied in style, endlessly changed. The origins of this mosque lie in the 8th century, but during the Seljuk dynasty, it burned down and was rebuilt again in the 11th century and several times underwent remodeling. Architectural historians consider the Friday Mosque of Isfahan to be a brick architectural masterpiece. While similar in magnitude to the mosques found in Syria and Cordoba, new elements, highly appreciated for their structural ingenuity and complexity, are also presented. The combination of decorative compositions created by the selection of brick patterns, the meticulous work in carved stucco, colored panels of floral, geometric, and epigraphic motifs, all make Seljuk architecture a highlight of the Friday mosque of Isfahan.