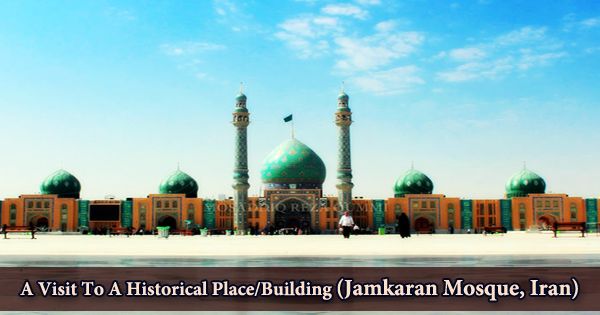 The Jamkaran Mosque (Persian: مسجد جمکران‎, Masjed-e Jamkarân) is situated in the village of Jamkaran, six kilometers from Qom, Iran’s second religious capital. Over the years, the “Jamkaran Mosque” has developed from a small mosque into the majestic complex it is today, formerly known as the Saheb al-Zaman and Hassan ibn Muthlih Jamkarani Mosques. Shia people claim that Sheikh Hassan Ebn Mesleh Jamkarani is associated with the building of the Jamkaran Mosque. As indicated by most records, Sheik Hassan ibn Muthlih Jamkarani is accounted for to have met the twelfth Shia Imam Muhammad al-Mahdi (brought into the world 869 CE) and was told to tell the proprietor of the land, Hasan canister Muslim, to quit developing it and utilize his income from this land to fund a mosque. In the Afsharid period (1736–1796), some accounts say that the mosque was completed. After its completion, Jamkaran Mosque has been repaired and renovated many times. Before the Iranian Revolution, the mosque had a small building, but it changed a lot after that. It is interesting to note that President Mahmoud Ahmadinejad’s government has contributed £ 10 million to finance the project to turn the tiny mosque into a huge mosque. The popularity of the mosque spread sometime in the decade between 1995-2005, and many pilgrims, particularly young people, began to come to it. There is a “well of requests” in the rear of the mosque where the Twelfth Imam is believed to have once “became miraculously unhidden for a brief shining moment of loving communion with his Creator.” Pioneers tie little strings in a tangle around the lattices covering the blessed well, which they expectation will be gotten by Imam Mahdi. Each day caretakers remove the strings from the earlier day. The mosque has no hints of Safavid (1501–1736) engineering. The mosque that was renovated in 1753 was a small building, according to an inscription. There was a courtyard added to it during the reign of Nasser-al Din Shah (1831-1896). The mosque and courtyard were renovated and extended during the reign of Mozaffar Ad-Din Shah Qajar (1853-1907). Around the courtyard were chambers and iwans (a vaulted hall, walled on three sides and open on one side) and two Ab-Anbars (water reservoirs) were built in and outside the courtyard.

As the foreign photographs of the mosque are now in a delicate stage, the main mosque and the well have recently been confined to the foreign press. Tuesday night is particularly common because it is said to be “the day the vision appeared and therefore the day of the week that the Imam, although invisible, takes requests.” The social occasion “takes after an enormous back end party where sellers set up in the parking garages and families set up excursion mats and several thousand meanders about the grounds as though trusting that the headliner will occur.” More than a hundred thousand pioneers at times supplicate outside the flooding mosque for Maghrib prayer. There are two areas devoted to each gender, as Islamic law keeps the sexes apart in public places. On Tuesdays, the mosque hosts many poor people and gives them a free evening meal. In 1952, Jamkaran was renovated and expanded again, this time adding a 17-meter-long and four-meter-wide entrance hall with six columns to the mosque and installing an inscription from 1753 in this hall. East of the courtyard, a smaller iwan was added with brickwork and seven-colored tile decorations. These tiles bear the architect’s name in Thuluth’s hand of calligraphy. In the southeast, the mosque had two 17-meter minarets, covered in delicate brickwork. The land surrounding the mosque was purchased and used to expand it after the victory of the 1979 Islamic Revolution. The current mosque has six courtyard entrances. Northeast of the mosque, the main Shabistan is located and has two 85-meter concrete minarets on either side with square bases and octagonal shafts. The main iwan has multidimensional mo’arraq tiles and the main Shabistan is an octagonal 1,100-square-meter space with one north and two south entrances. This Shabistan has eight octagonal columns decorated with mo’arraq tiles and ceiling moqarnas. Above this Shabistan, there is the dome of the mosque. At the base of the dome are 23 metal lightwells with colored glass that provide the Shabistan with lighting. Half of the mosque’s walls are covered with marble and the other half are decorated with tilework. The Mihrab (prayer niche) is paved in tiles and is decorated with stucco moqarnas.