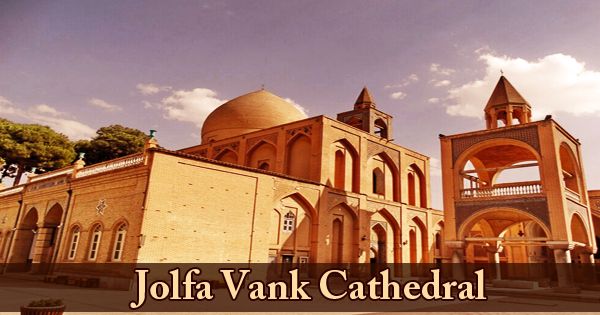 A Visit To A Historical Place/Building (Jolfa Vank Cathedral)

The Cathedral of the Holy Savior (Armenian: Սուրբ Ամենափրկիչ Վանք – Surb Amenaprkich Vank; Persian: کلیسای آمناپرکیچ‎ – Kelisā ye Āmenāperkič), generally known as “Jolfa Vank Cathedral”, is located on the southern bank of the Zayandeh River in the Modern Jolfa district of Isfahan, central Iran. The Cathedral combines Islamic motifs and features with those of Armenians in a harmonious manner. It is also known as the Church of the Saintly Sisters, and it is commonly referred to as the Vank (Վանք; وانک), which means “monastery” or “convent” in the Armenian language. Vank Cathedral served as the centerpiece of the Esfahan Georgian Armenian culture. When they were recruited by the Shah to help the state in cementing control of the lucrative silk monopoly, the Armenians became a powerful minority in Esfahan. Approximately 150,000 Armenians left Julfa in Nakhchivan, now an exclave of the Republic of Azerbaijan, and settled in Isfahan in 1606, where they were given refuge by Safavid monarch Shah Abbas I (1571-1629) and called their new home New Jolfa. In the cathedral’s mixture of design styles and similarities in its external and internal architectural treatment, the varying fortunes and freedom of this suburb across the Zayande River and its diverse mix of European missionaries, mercenaries and travelers can be traced almost chronologically. In the afternoon, many tourists visit the cathedral and linger in New Jolfa to enjoy dinner in the relatively liberal ambience of the village. For good reasons, Isfahan is Iran’s top destination for visitors. Its profusion of tree-lined boulevards, Persian gardens, and significant Islamic buildings gives it a visual appeal unmatched by any other Iranian city, and its reputation as a living museum of traditional culture is underpinned by the many artisans employed here. 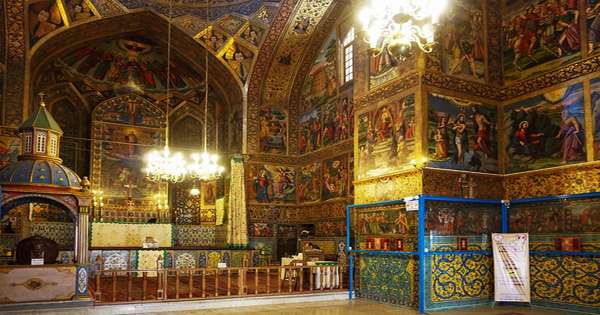 (Interior of the Cathedral)

The cathedral consists of a domed sanctuary, much like an Iranian mosque, but typically seen in western churches with the major addition of a semi-octagonal apse and elevated chancel. With restored wall paintings full of life and color, including grotesque martyrdoms and pantomime spirits, its sumptuous interior is richly ornamented. The ceiling above the entrance is painted in the Persian miniature style, with delicate floral motifs. Around the interior walls are two parts, or bands, of murals: the top section depicts events from Jesus’ life, while the bottom section depicts tortures imposed by the Ottoman Empire on Armenian martyrs. Construction is believed to have begun with the first arrivals in 1606 and completed with significant design improvements under the guidance of Archbishop David between 1655 and 1664. Compared to its elaborately painted interior, the exterior of the cathedral is made of relatively modern brickwork and is exceptionally simple. There is also a museum that exhibits a great array of illustrated gospels and Bibles, some of which date back to the 10th century. In the courtyard, during the reign of Sultan Husayn (1668-1726) and 38 years after the Cathedral, the bell tower was completed. The tower, which was financed by an Armenian merchant, is situated directly opposite the church entrance. Under this tower are found the graves of an Armenian soldier and a religious leader. A large freestanding belfry looming over the graves of both Orthodox and Protestant Christians is in the courtyard. The graves include those of Alexander Decover, the Russian consul and banker, Sir George Malcolm, an English army officer, and Andrew Jukes, an English surgeon and British government agent. There is a building containing a library and museum across the courtyard and facing the cathedral. Several carved stones depicting scenes from the Bible are outside this house.