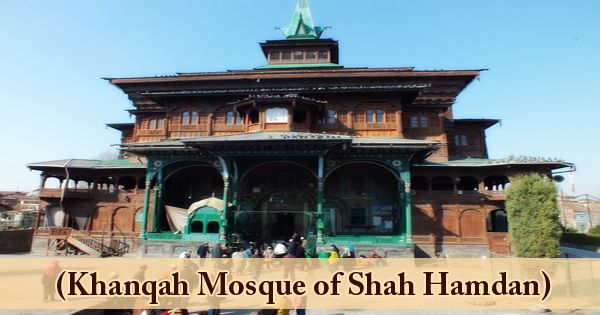 Khanqah-e-Moula, also known as Shah-e-Hamadan Masjid and Khanqah, is a mosque between the Fateh Kadal and Zaina Kadal bridges, located on the right bank of the Jhelum River. In Srinagar, Jammu and Kashmir, India, this mosque is situated in the Old City. In 1395, to commemorate the visit of Mir Sayyid Ali Hamdani, better known as Shah Hamdan, it was designed by Shah Sikandar. This mosque is one of Kashmiri wooden architecture’s finest examples and is decorated with paper mache. In the following decades, a fire claimed the mosque several times and the present building, as seen today, was founded in 1732 by Abul Barkat Khan. This mosque stands 38 meters high now. This mosque is also used as a khanqah, designed by Sultan Sikandar and dedicated to the memory of Mir Sayyid Ali Hamdani, a Muslim saint from Hamadan, Persia. There is a reference in the Ain-i-Akbari of Abul Fazal of a saint living in Srinagar and establishing this monastery in his honor. The shrine was destroyed in 1480 AD due to fire. The ruler of that period, Sultan Hassan Shah, extended and restored his premises. The Khanqah was destroyed by fire again in 1731 AD and then repaired by Abdul Barkat Khan. Most of Kashmir’s mosques and shrines (ziyarat) are based on a low, cubic architectural pattern that forms the prayer hall or burial chamber, which is then covered by a pyramidal roof and sometimes supported by a series of pillars. A third element known as the mazina, consisting of a square, open pavilion from which the muezzin will call for prayer (azan) and a sharp spire representing the minaret, would be accessible to the large mosques. There are four strong wooden pillars nearly 23′ (7m) high at the center of the prayer hall, positioned in a square formation that supports the ceiling. They are decorated with painted wooden chips arranged on the shafts in a fishbone pattern, carved lotus motifs at the base, and 16-sided capitals with leaf patterns. 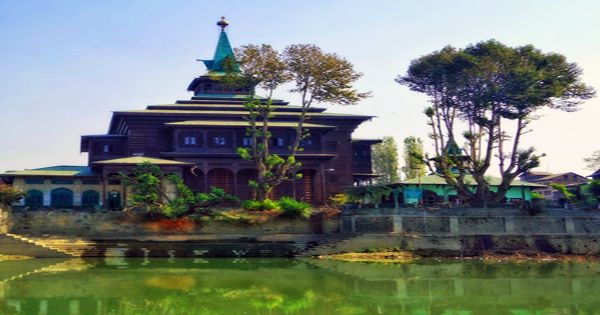 According to some sources, after destroying an ancient temple dedicated to the Hindu goddess Kali and a sacred Hindu site, the current mosque structure was built, some believe that Sayyid Ali Hamdani had demolished the Kali temple and built the present mosque with its material and that within the mosque is still a spring dedicated to Kali. This local typology of mosque architecture matches the Shah Hamadan Masjid neatly. On either side, it has a square plan measuring about 75′-6″ (23m) and sits on an irregular walled base composed of ancient temple materials. It is a two-storey, two-tiered building, each tier separated by gently sloping, pyramidal roofs. Heavy woodwork done on the cornices under the eaves further emphasizes the roofs. The mosque is most notable for the exquisite and intricate wood carvings done using time-honored techniques by professional Kashmiri woodcarvers. With its delicate wooden grilles (pinjras) and slender columns, the arcaded verandahs and balconies not only provide structural support to the roof but also generate the impression that the 52′-6 ‘(16m)-the tall mosque is soaring into the sky. The second tier’s pyramidal roof is topped off by an open muezzin pavilion, crowned in turn by a sharp pyramidal spire. On each face, the base of the spire has a protruding triangular decorative window and at the apex has a gold end ornament (alem). The seasonally flowering vegetation has covered parts of the roof over time producing a beautiful impression of intricate woodwork and terraced flowerbeds. A fire broke out in the sanctuary on 15th November 2017, damaging the spire of the structure. Fire tenders were placed on the scene and the spread of the fire was stopped, preventing any further damage to the house. Restoration work was launched immediately and a refurbished crown was successfully placed on the spire of the shrine on 30th March 2018.