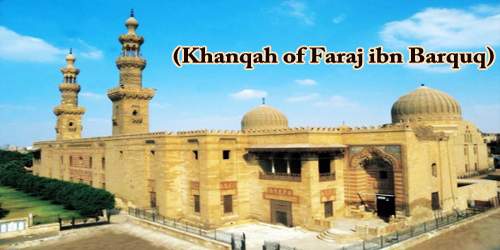 The Khanqah of Faraj ibn Barquq (Arabic: خانقاه فرج ابن برقوق‎) is considered to be one of the largest multi-purpose complexes to be built in Egypt’s cemeteries, as it consists of a mosque, a khanqah for sufi people, a madrasa for religious learning, two mausoleums, two sabils (water dispensaries) and on top of each sabil, a kuttab, a Qur’anic school for children. It is a religious Islamic funerary complex, founded between 1400 and 1411 CE by the Mamluk Sultan Faraj ibn Barquq. It is located in the Northern Cemetery in Cairo, Egypt, and is a part of the ancient necropolis districts in Cairo. It is also considered one of Mamluk’s most accomplished architectural works in Cairo, and one of the Northern Cemetery district’s largest monuments. The building’s primary façade is to the northwest side. And there is an entrance to the complex on either end of it which is topped by a tri-lobed arch. The western portal is used at the present time. This tomb is one of Cairo’s largest landmarks, and one of the Northern Cemetery’s three excellent buildings. The impetus for the construction of the Northern Cemetery was prompted by the desire of Sultan Barquq, the first of the Circassian or Burgi Mamluks (1382-99), to be buried in the desert beside the tombs of venerated Sufi shaykhs, and not in his state monument in Bayn al-Qasrayn. 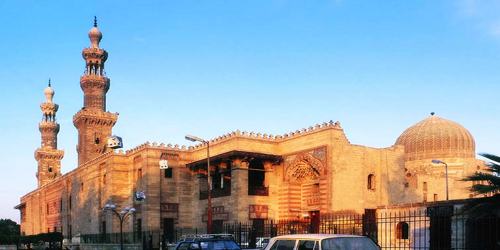 Faraj was unable to avoid disastrous incursions into Syria by Timur (Tamerlane) (starting in 1400), and he was briefly deposed in 1405 before regaining the throne. He was held accountable by his opponents for financial mismanagement, which depleted the treasury, and for the draconian taxation. In 1411, at the age of 23, he was finally deposed and murdered. The complex built for Sultan Barquq by his son Faraj, at the foot of the Muqattam range, was truly the primary try to urbanize the desert. Originally, the complex was planned because of the center of an oversized residential district that was to incorporate, additionally to the most funerary endowment with its kitchens and living units, subsidiary establishments like baths, bakeries, grain mills, rooms for travelers, alleys, and a marketplace. Nevertheless, there was an important caravan road here that was part of the road to Mecca which meant that travelers were still passing through the area on a regular basis. Faraj was described by the fifteenth-century historian al-Maqrizi as “the most tragic king of Egypt”. At the age of ten, Faraj took the throne and was twenty-three in Damascus when he was deposed and killed. His reign was one of continuous conflict among the amirs, and as such was also a background of rivalries between them. 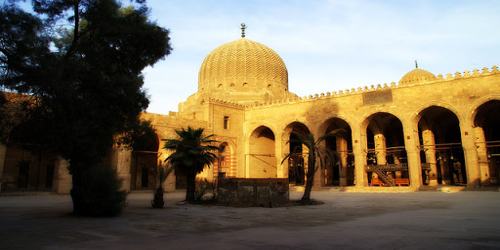 (Inside View of Khanqah of Faraj ibn Barquq)

The floor-plan of the complex is sort of square, approximately 85 m x 85 m. It consists of an outsized open courtyard measuring 37 m x 40 m, surrounded by four iwans. The most important and deepest of those iwans is that the qibla iwan, measuring 34 m x 17 m. The qibla iwan consists of three arches perpendicular to the other arches running parallel to the qibla wall. Including twin minarets, twin carved masonry domes covering the two burial chambers, and twin sabil-kuttabs, all arranged in a bilateral symmetrical fashion, the khanqah is unique. However, the plan is that of a congregational mosque, which involves a hypostyle scheme mounting arcades on piers and an open central courtyard with adjoining arcades. Unlike madrasas, which adopted the extroverted four-iwan plan with the students’ cells looking onto the streets and which expanded their role to incorporate Friday prayers, khanqah architecture generally adopted an introverted scheme to confirm the required seclusion for the Sufis. The qibla iwan is covered by 21 shallow brick domes, the transition zones of which are shaped by spherical pendentives, resembling the domes in the Fatimid Mosque colonnades, al-Aqmar. Also made of stone, the minbar features excellent craftsmanship with carved geometric designs, although it was later donated by Sultan Qaytbay in 1483 and represents the artistic quality of that period. However, many of the living units of the khanqah of Faraj have their windows facing outward toward the desert and structures of the dead, which might function objects for contemplation.