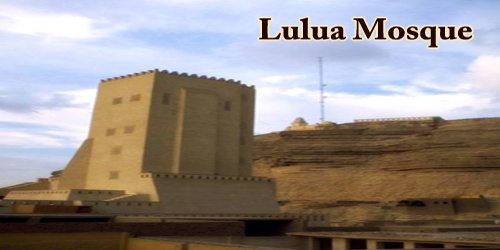 The Lulua Mosque (Arabic: مسجد اللؤلؤة‎; meaning: the Pearl), also known by many other names like al-Lu’lu’a Mosque, Majid aasl-Luʼluʼah, Mosque of al-Lu’lu’a, Mosque of al-Lulua, Luluah Mosque, Qabr Lu’lu’a Bint al-Muqauqis, Mosque of al Lulua, built between 1015-1016 AD, this mosque is one of several small mosques built on the Muqattam Hill that are attributed to the reign of al-Hakim. Besides this mosque, one can see Shahin El-Khalawati’s Khanqah and Tomb. The mosque was constructed under the reign of Sultan El-Hakim Bi Amr Allah who was killed in El-Muqattam town. The mosque collapsed partly in 1919 but was later rebuilt by the Dawoodi Bohras in 1998, who trace their religious heritage to the Fatimid Caliphate. It is situated in the Moqattam hills, in the southern cemetery. It has an average height of 180 meters (590 ft ) above sea level, with the highest peak at 213 meters (699 ft). This rectangular-shaped mosque has been luxuriously decorated, which is why it is called Lulua’s mosque, or pearl. The mosque façade was lined with three arched brick and stone openings. It was a vital ancient Egyptian quarry site for limestone, employed in the construction of mosques and churches. This limestone was also used to build the Lulua Mosque. The mosque is near the slope of that hill. The mosque is about 1 kilometer (0.62 mi) south-east from the Sharia Salah Salim. 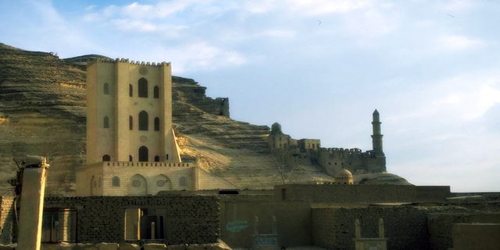 The mosque consists of two floors: the primary one is made by limestone blocks that are taken from another area, while the upper floor and therefore the vaults are the product of brick. there’s an undecorated Mihrab within the level while the second floor is furnished with a beautifully ornamented Mihrab and a few windows that illuminate the place. The Fatimid Caliph al-Hakim (996–1021), the third caliph of the Ismaili Shia dynasty in Egypt, also credited with the construction of Cairo, founded this mosque among several small mosques built on the Muqattam Hill. It is said that Hakim used to frequent the mosque for worship in the evenings alone. Etymologically the name al-Lu’lu’a means “the pearl” as the mosque’s exterior appearance was ornate and lustrous. The tower-like mosque was three-level rectangular in plan, with the ground-floor walls constructed with a rubble core of local limestone blocks. The arches were made of brick and stone, the upper levels and the vaults were made of concrete, and possibly plastered the interior walls. 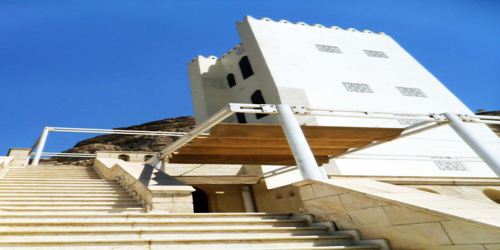 The Lulua Mosque originally consisted of a three storey tower-like structure constructed on a rectangular plan. The ground floor was partly digged out of the hill. It was a vaulted barrel with a triple-arched entrance, simple qibla (mihrab) on the back wall at each floor (multiple qibla in one mosque being a unique feature of this mosque), and was made of rubble calcareous stone. Even the central level was barrel-vaulted, had an ornamented mihrab and a rectangular window illuminated it. The uppermost level was split into two rooms, most possibly illuminated by a single light. Some of the architectural features common to all Al-Hakim-built mosques, including the Lulua Mosque, include the adoption for ceremonial purposes of proposed portals and domes over mihrabs. Keel-shaped arches in porticoes and arcades were also prominent features. Large numbers of the profusion of fine stucco decorations were seen, particularly on the mihrabs and qibla walls. There were numerous iconographic inscriptions on the facade. The mosque’s façade and vaults collapsed in 1919 but the Dawoodi Bohras recently reconstructed the mosque.