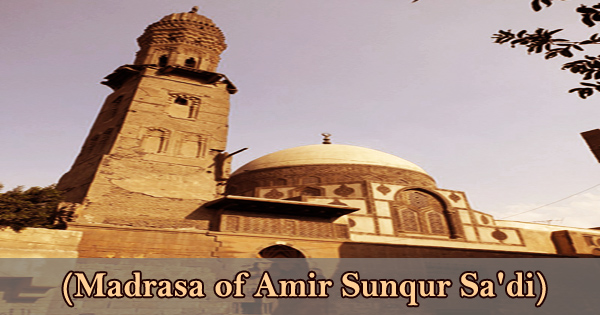 The Madrasa of Amir Sunqur Sa’di (Arabic: مدرسة سنقر السعدي‎), also widely known as the Mausoleum of (Sheikh) Hasan Sadaqa, was built between 1315 and 1321 on the orders of Amir Sunqur Sa’di. It is a madrasa structure and mausoleum of the Medieval Mamluk period in Cairo, Egypt. In his lifetime, Sunqur was forced to leave Egypt and was never buried there, but later buried in it was a sheikh known as Hasan Sadaqa, and hence the building is also known by his name. This complex, now known as the Tomb of Shaykh Hasan Sadaqa, offers a vivid example of an architectural layer that stretches 1,000 years, from the ninth to the nineteenth centuries. The complex was converted into a Mevlevi Sufi lodge (a takkiya, or more simply a mawlawiyya) from the 17th century onwards and is now open as a Mawlawiyya Museum or Mevlevi Museum. There is some confusion regarding whether the mausoleum was planned from the beginning to be dedicated to the tomb of Hasan Sadaqa. The cenotaph over the tomb of Hasan Sadaqa mentions Sunqur as the building’s builder but notes that the building is Hasan Sadaqa himself’s shrine (darih). As the Mevlevi order constructed their facilities on top of it, the madrasa structure itself only partially remains today. The mausoleum and the ceremonial hall of the Sama are in better shape and have recently been rebuilt. The dome, especially in the transitional zone, is unparalleled in its exterior stucco decoration. In the form of literary quotations from the famous medieval work the Maqamat of al-Hariri, its drum is carved with arabesques and inscriptions. On the subject of death, the text is a passage. 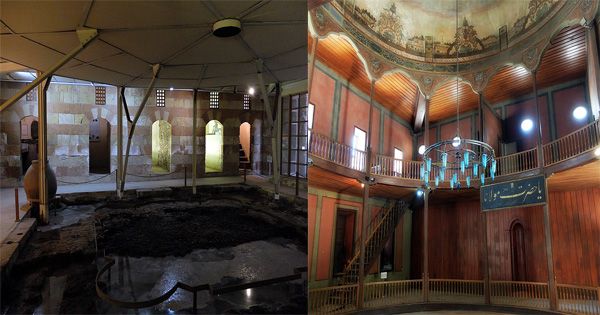 (Left side: The remains of the 14th-century madrasa courtyard, now located below the floor of the Mevlevi lodge.)

(Right side: The 19th-century sama’khana, or ceremonial hall, of the Mevlevi lodge.)

The entrance to the building from the street is through a doorway under a canopy, including stone-carved decorations. To the left are the mausoleum and the former madrasa, marked at the corner of the building by a dome and minaret. With a square shaft and a fluted cap with a keel-arch profile (similar to the minaret of the Salar and Sanjar al-Jawli Mausoleum), the overall shape of the minaret is typical of the Bahri Mamluk period. Among pre-Ottoman buildings in Cairo, the stucco frieze of Qur’anic inscriptions that runs round the four sides of the interior of the mausoleum is remarkable for having the date 721 H. In digits, (A.D. 1321) expressed. Within, the ruins of the madrasa are situated under the theatre of the 19th-century Sufi lodge. The madrasa walls are built of ablaq (two-colored) stone, around a central courtyard (sahn) with wide iwans (vaulted rooms open on one side), and many smaller rooms around them. An Italian team under the direction of Dr. Giuseppe Fanfoni has been working on the building since the late 1970s. A Mevlevi dervish hostel, a mawlawiya, inside the Sunqur Sa’di precinct was the main purpose of the Italian-sponsored excavations and restorations. The Mevlevi were adherents of Jalal al-Din Rumi, the Turkish mystic and poet of the thirteenth century. Just after the Ottoman invasion, the Mevlevi dervishes (known as whirling dervishes in the West) came to Egypt. Today, only the Northwest Iwan remains, next to the Chamber of the Mausoleum. The remains of a fountain with a lobed profile, excavated during modern restorations that date back to the Tulunid era in the 9th century, are in the central courtyard. An even older well (dating from before 850 CE) was also discovered in another corner. The present building structure, dating from the nineteenth century, is the result of adaptive changes made by the order given to them in 1607 on land containing the remains of the madrasa of Suqur Sa’di and part of the nearby Qwsun/Yazbak palace. The Sama ‘Khana, or Hall of Listening, is the showpiece of this historical ensemble, and of the Italian job, where the main dervish ceremonies took place. The new construction of the theatre was built in 1810, while the décor dates from 1857. The decoration includes scenes drawn under the dome of landscapes, gardens, and birds, plus a circular Arabic inscription at the apex of the dome.