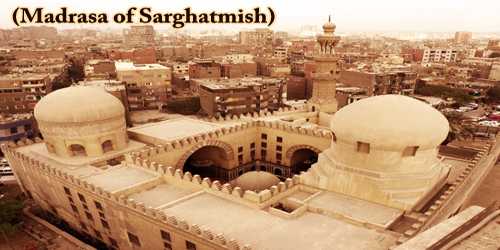 The cruciform Madrasah of the Amir Sarghatmish, the mosque was built in 1356 for Amir Sarghitmish, whose career started under Sultan al-Muzaffar Haji and ended during Sultan Hasan’s reign, while only dedicated to the Hanafi rite, adopts a four-iwan style. It is located northeast of the Ibn Tulun Mosque in Islamic Cairo. From the spiral minaret of Ibn Tulun, the building’s school, mosque, and mausoleum can be seen, while its entrance is on Saliba Lane. A madrasa, mosque, and mausoleum are included in this system. The madrasa is often referred to as the Sarghatmish Amir al-Sayf Mosque. The building’s principal (northwestern) façade overlooks the street. A dome tops the mausoleum on the southern end of the façade. This dome was in-built the style of Samarkand (Persian) domes, because it is of an elongated bulbous shape, with a high drum, built from brick. It’s composed of an outer shell and an inner one. Unlike Qalawun and al-Nasir Muhammad’s cruciform madrasas, the side iwans are of substantial size and thus leave little room for the student living units on the lateral sides of the courtyard, most of which have their windows on the outside as a result. This marks the start of a movement towards incorporating madrasas into urban life. Sarghatmish was a handsome and zealous man, according to the renowned Egyptian historian, al-Maqrizi, who would recite the Qur’an every day and go to legal discussions between Hanafi scholars. The southern façade consists of a portal within a recess, which is crowned by an arch, and topped by a semi-circular domed ceiling, below which are muqarnas. This entrance is paying homage to the portal into Madrasa al-Tashtamuriyya (built AH 782/AD 1381) within the city of Jerusalem. 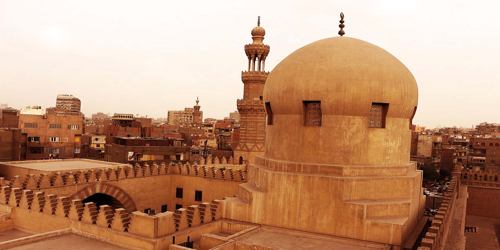 The Sarghatmish Madrasa, adjacent to the famous Ibn Tulun Mosque, is a prime example of Mamluk architectural creativity. In line with the cruciform, or cross-shaped, madrasa plan, the building’s four iwan layout is. Innovative features include hanging triangles under the semi-dome of the portal, the patterns of the two-colored inlaid masonry on the minaret, the central covering of a portion of the qibla iwan with a dome (a feature unique in Cairene cruciform-plan madrasas), and therefore the double-shell brick dome of the mausoleum with its unusually high drum. The earliest dated instance of a stalactite cornice on the exterior of a dome is housed in this dome, which lacks the usual pointed top. The Persian history of the madrasa students may account for the exotic characteristics of the dome. The mihrab is a semi-circular niche in the wall that indicates the qibla’s position, or the Kaaba’s direction. This wall is decorated with panels of white marble cut in with medallions. Some marble carvings include arabesques, a lamp on the mosque, birds, and a pair of hands carrying a stem. These carvings of real figures, especially birds and hands, are unique to the art and architecture of Mamluk art. It fell and was restored to its original form in 1940. There are still relics of revetment on the walls on the two sides of the mihrab consisting of marble panels bearing the blazon and the Amir Sarghatmish names. There is another panel containing leafy decorations and grape and vine leaf clusters. Nine panels of qibla iwan wall revetment have been moved to the Cairo Museum of Islamic Art. From the courtyard, student housing is visible. In the corners between the four iwans, the cells go up three stories. Some of them overlook the courtyard, and others overlook the street. This madrasa demonstrates how a unique volumetric composition was created by the desire to reconcile the façade with the current street alignment while orienting the interior to the qibla, and the desire to show the mausoleum to the passersby to invoke their blessings, offering a rich sequential experience on both the interior and exterior.