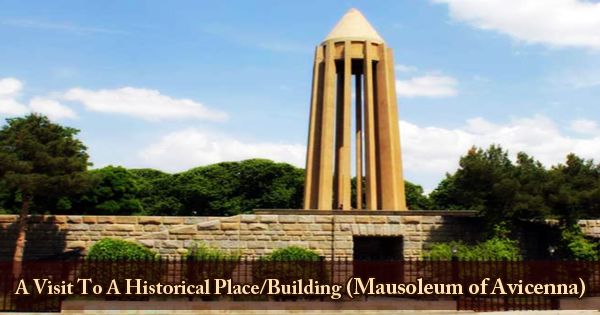 A Visit To A Historical Place/Building (Mausoleum of Avicenna)

The Mausoleum of Avicenna is a complex located in Avicenna Square, Hamadan, Iran, built-in 1953 on the occasion of the millennial birth anniversary of the philosopher by the Iranian Monuments Society. The significant 11th-century thinker who had a great account of philosophy, logic, mathematics, astronomy, and geometry was Abu Ali Sina, best known in the world as Avicenna. Until the 17th century, his very work, Canon, on medicine, had been regarded as the most valuable scientific book in the medical field. As a medical textbook in Europe and the Islamic world, many scientists still use Canon as a reference book. To resemble the Gunbad-i-Qabus tomb tower in northern Iran (built-in 1006), the Mausoleum of Avicenna was deliberately built, albeit with an empty, open interior made possible by modern building materials. The complex, dedicated to the Iranian polymath Avicenna, consists of a library, a small museum, and a spindle-shaped tower inspired by the Kavus Tower of the Ziyarid era. The mausoleum of Avicenna is Hamedan’s iconic building, located on the eponymous street. A student and friend of Avicenna’s, Abu Saeed Dokhduk, used to live in a house on this street. After the death of Avicenna, he was finally buried in this home, and after a while, the body of Abu Saeed was buried next to his old friend. The Mausoleum of Avicenna is not simply a crypt. A library comprising 8000 volumes of exquisite handwritten and printed Iranian and foreign books and some booths linked to masterpieces by Bu-Ali Sina and other poets and authors of Hamadan is part of the northern space. 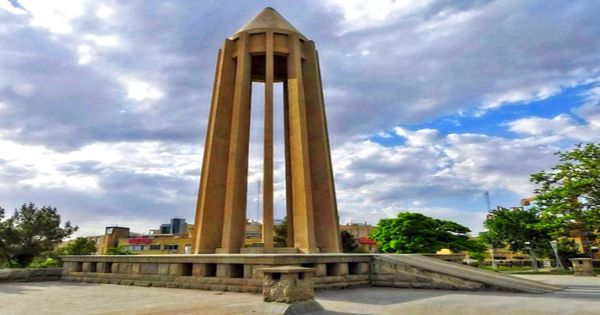 One of Iran’s most prominent scientists is Avicenna. Over two hundred books have been published in various fields, such as philosophy, medicine, etc. Of course, many of his books were written in Arabic, as Arabic was spoken by people, but later they were translated into Persian. Avicenna was born c. 980 in Bukhara (in present-day Uzbekistan), the capital of the Samanids, and He died in June 1037, in his fifty-eighth year, and was buried in Hamadan, Iran. During the Qajar period, his tomb was renovated and the previous gravestones were set in the new tomb after construction. Then they wanted to build a tomb again later on, which is a mixture of old and modern architecture. It was built in 1952 and designed by Hooshang Seyhoun, replacing an older building dedicated to Avicenna that was demolished in 1950. Since at least 1939, the Pahlavi government has had plans to build the mausoleum. In a grand ceremony in May 1954, the mausoleum was finally dedicated and the road running in front of it was also renamed in honor of Avicenna. The tomb of Avicenna consists of 12 columns representing 12 science fields in which he mastered; from the top, these columns are linked to each other. It looks good and attractive indeed. One of the most touristic attractions of the Hamadan province is the Avicenna mausoleum. The construction of the tomb is a mixture of Iranian architecture, both ancient and post-Islamic. In this style, several elements of ancient Iranian architecture are used. The southern hall of the tomb is a museum that houses B.C. coins, ceramics, bronzes, and other objects found. Millennia and the age of Islam. The most remarkable item in this museum is the skull of Abu-Ali Sina, which was captured during the demolition of the old Mausoleum. A half-circle park with green space complements this tomb, and there is also the statue of Abu-Ali Sina, carrying a book in his hand on the east side of the square. The inner portion of the mausoleum is adorned with a marble stone monolith, 2.55 meters high. Also, 40 pieces of marble stones with 20 verses from Avicenna are inscribed. On the right side of the entrance is Avicenna’s tombstone, and on the left side of the entrance is Abu Saeed Dokhduk’s tombstone. As the monument was a key aspect of the Pahlavi government’s promotion of Iranian nationalism, it was thus in danger of being defaced, but as Khomeini himself was an admirer of Avicenna, the square was not renamed after the Revolution of 1979. The tomb of the great poet, Abulqasem Aref Qazvini, is also located in the mausoleum’s eastern yard.