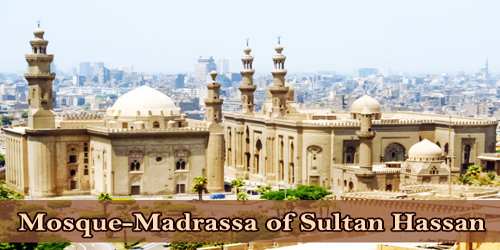 Between 1356 and 1363, Sultan Hassan, the grandson of Sultan Qalaun, founded the Mosque-Madrassa of Sultan Hassan (Arabic: مسجد ومدرسة السلطان حسن‎); at the age of 13, he took the throne, was deposed and restored no less than three times, then assassinated shortly before the mosque was completed. It is a monumental mosque and madrassa situated in Egypt’s historic Cairo district. This grand building, huge and elegant, is regarded as the finest piece of early Mamluk architecture in Cairo. This building blends power and splendor, grace, and elegance, as well as a number of decorations. The main northern façade, which stretches to around 145 m in length and reaches a height of 38 m, is one of the most prominent features of the house. In a prominent location below the Citadel, towards which the monumental portal is oriented, the free-standing complex, which had a monumental domed mausoleum flanking minarets, only one of which remains, is located? All the duration of the façade is occupied by the muqarnas-hood portal. The height of the outside walls and the design of the windows give a clear vertical focus to the facades. The building is approximately 500 meters long, 68 meters wide, and 36 meters tall. It is geared towards Mecca, which is to the southeast of Cairo, like all the mosques. A dark passage leads into a quiet square courtyard beyond the striking recessed entrance, surrounded by four soaring iwans (vaulted halls). The Iwans were committed to teaching the four major Sunni Islam schools. For its large scale and revolutionary architectural elements, the mosque was considered remarkable and is still considered one of the most impressive historic monuments in Cairo today. 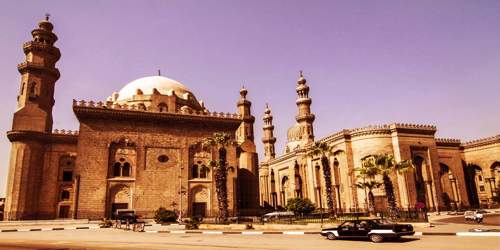 The madrasas’ four iwan layout occupies the middle of the plan, with a fountain of ablutions in the middle of the courtyard and the four madrasas located in the plan’s corners. A particularly beautiful mihrab (a mosque niche indicating the path of Mecca) is flanked by stolen Crusader columns at the back of the eastern iwan. To the right, a bronze door leads to the mausoleum of the sultan. The façade consists of a series of decorations in stone and marble and ends with a magnificent and elegant cornice at the apex, consisting of nine levels of minute muqarnas that resemble a honeycomb. A towering portal, considered one of the most imposing entrances to an Islamic building in Egypt, is included in this façade. One of the minarets collapsed during construction and killed some 300 onlookers, sparking superstitious speculation that the reign of Sultan Hassan was at an end. They weren’t wrong. Just over a month later, his army commander assassinated him. It is also assumed that limestone from the Giza Pyramids was extracted for use in the building of the mosque. The qibla iwan is considerably larger than the other three, which in size and scale are all monumental. The cells were arranged along the street facades rather than incorporating the cells of the students into the central space, and their windows are an integral part of the facade architecture. Two minarets, the older being the 81,60 m tall southern minaret, top the building’s eastern façade. In the manner of Mamluk minarets, both minarets consist of a square base followed by two octagonal stories. In the 20th century, the minarets were rebuilt. The original bronze-covered entrance doors were forcefully purchased in the early 15th century by Sultan Mu’ayyad for use in his own mosque at a modest price, and can still be seen there today. The house contains a decorative mausoleum in which the son of the founder, Shihab Ahmad (d. AH 788/AD 1386), is buried. The mausoleum is square in shape, with sides 21 m in length and a dome 48 m high surrounding it.