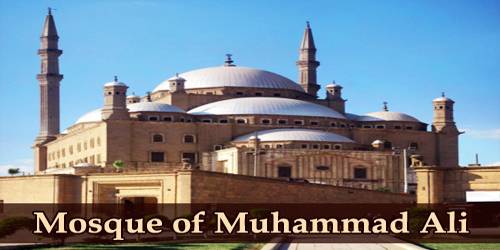 A Visit To A Historical Place/Building (Mosque of Muhammad Ali)

One of Egypt’s most renowned historical and touristic attractions is the Great Mosque of Muhammad Ali Pasha or ‘Alabaster Mosque’ (Arabic: مسجد محمد علي, Turkish: Mehmet Ali Paşa Camii). It is a mosque situated in Egypt’s Citadel of Cairo and was commissioned between 1830 and 1848 by Muhammad Ali Pasha. The mosque was largely designed in the Ottoman style, indicating Egypt’s political situation during this period. Construction of the mosque began in AH 1246 / AD 1830 and work continued on it, without interruption, until the death of Muhammad Ali Pasha in AH 1265 / AD 1848. He was buried in a tomb that he had planned for himself inside the mosque in the southwestern corner. Located at the summit of the citadel, this Ottoman mosque, the largest to be built in the first half of the 19th century, is the most noticeable Mosque in Cairo, with its animated silhouette and twin minarets. The mosque was inbuilt memory of Tusun Pasha, Muhammad Ali’s oldest son, who died in 1816. Its tall, pointed minarets are 82 meters high. The inside is topped by an enormous central dome, supported by four semi-domes. The roof is supported at the corners by a further four domes. This mosque, along with the citadel, is one of the landmarks and tourist attractions of Cairo and is one of the first features to be seen when entering the city from any direction. 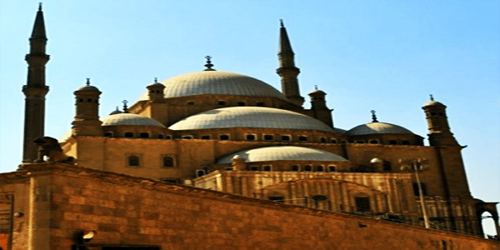 By the time of the death of Ali Pasha, construction of the walls, domes, and minarets had been completed, and when ‘Abbas Pasha I took power (r. AH 1265-70 / AD 1848-54), he ordered the completion of work on the marble, carvings, and gilding, and added a marble building and a copper maqsura for the mausoleum of Ali Pasha. This mosque is built on the site of Mamluk palaces demolished at the behest of the patron, an act reminiscent of that of Saladin who wiped out all traces of Fatimid influence by destroying their palaces, and it also superseded the adjacent Mosque of al-Nasir Muhammad as the current state mosque. It was built in a square plan and measured 41×41 meters. The central dome has a diameter of 21 meters and the building’s height is 52 meters. On the western side of the mosque, two elegant cylindrical minarets of the Turkish form, with two balconies and conical tops, rise to 82 meters. The mosque has two minbars (pulpits), the larger is original with wood and gold decoration. In 1939, the smaller Minbar alabaster was a gift from King Farouk. The architects chose Egyptian alabaster instead of marble to decorate the mosque. There is a brass clock tower in the center of the northwestern riwak, which was given to Muhammad Ali by King Louis Philippe of France in 1845. The clock was reciprocated with the obelisk of Luxor now standing in Place de la Concorde in Paris. The western part of the mosque is created from a 53 m x 54 m courtyard. This can be surrounded by four colonnades whose arches are supported by marble columns. There are four semicircular domes around the central dome. The corners are also made up of four smaller domes. The domes are white and embellished in relief with motifs. The walls and pillars are coated with alabaster up to 11 meters high. The wooden dome’s interior surface is adorned with Baroque-style landscape paintings.