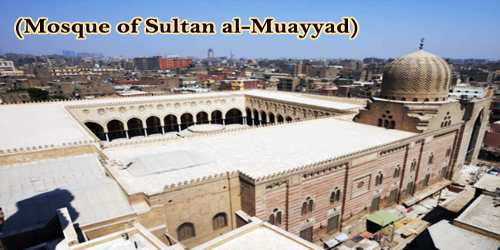 The Mosque of Sultan al-Mu’ayyad (Arabic: مسجد السلطان المؤيد‎) was designed by Sultan al-Mu’ayyad Sayf Aldin Shaykh of the Mamluk and founded on the site of an old prison where he was imprisoned while he was a soldier of the Mamluk. Construction started in 1415 and in 1421 the mosque was completed. A Friday mosque and a madrasa for four madhhabs were part of the complex. Near Bab Zuwaila, Sultan Al-Muayyad Mosque is situated. It is considered one of the most interesting examples of Egypt’s Mamluk architecture, and because of its location, the mosque and its minarets became a Cairo landmark. In 1421, eleven years after he took power, Sultan al-Mu’ayyad Shaykh died. He earned a reputation as a modest man during his reign and as one of the great patrons of architecture in Cairo. The sultan left behind a number of religious and secular monuments upon his death, including the Khanqah in Giza, palaces along the Khalij El-Arab and the Nile, and the Sultan al-Mu’ayyad Mosque. The construction of the mosque was started in 1415 and completed in 1421, and as it took 40,000 dinars, it was a difficult task. It includes a mosque, Sultan’s mausoleum, additionally to a faculty that was one amongst the foremost outstanding academic institutions, and moreover sepulcher for Al Muayyad himself. There were four front facades and a few entrances to the building. The main portal of the mosque is professionally decorated with muqarnas of beauty and Kufic calligraphic script. Even after the formal completion of the building of the mosque, a number of buildings were never constructed in the initial plans. Never was the dome of the second mausoleum attached to the mosque completed. A separate building to be used as dormitories by Sufi students who studied at the madrasa weren’t immediately erected, despite an allocation of 20,000 dinars toward them. Later mosque records are unclear on whether the Sufi dormitories were later completed as plans, though the scholars definitely got space within which to measure. 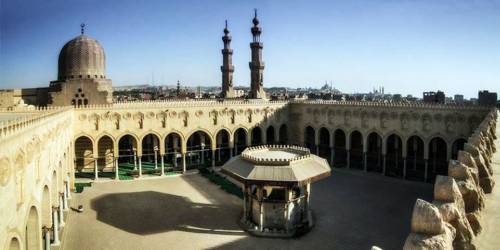 The opening ceremony was memorable as Sultan al-Mu’ayyad personally attended the ceremony with his Mamluk entourage and the water basin was filled with liquefied sugar in the middle of the large courtyard and sweets were offered. The main portal, or muqarnas, is set in a rectangular frame or pistachio that rises above the facade of the mosque. The main door is a bronze masterpiece taken from Sultan Hassan’s Mosque-Madrassa, while the dome is a typical example of Mamluk stone masonry with a cylindrical base and a zig-zag carved design. The original facades were particularly tall for the amount, because of the additional height added by the Fatimid towers at the bottom of the minarets. The architect, Muhammad ibn al-Qazzaz, used its towers as both buttresses and bases, from which the 2 identical minarets rise, to exploit the mosque’s proximity to Bab Zuwayla. An excellent example of this type of surface decoration for carved masonry domes from this time is the carved chevrons decorating the exterior of the stone dome, which are also to be seen on the octagonal second stories of the twin minarets. In a traditional period theme, the mihrab and minbar are both decorated. The minbar is decorated with finely carved wooden doors and panels, and above the minbar could be a large rosette of polychrome marble. This is often particularly unique because this style is sometimes used on a floor, instead of upon a wall. The mosque originally had four facades, but within the late nineteenth century, it had been in such disrepair that the Comite rebuilt the western facade and turned the courtyard into a garden. The mosque was restored again in 2001, this time under the orders of the Egyptian Ministry of Culture. The restorations also include the re-building around the courtyard of the missing arcades. Both the mihrab and minbar are fine examples of the period’s architecture, while the ceilings, restored at the beginning of the twentieth century, look like suspended carpets. The mosque contains a remarkably large pavilion compared to other mosques within the area with an ablutions fountain within the centre. The initial fountain was said to possess marble columns roofed with a gilded wooden dome above an awning, adding to the building’s splendor. The ruins of a hammam which formed part of the foundation of the mosque are just west of the mosque. A cartouche in which the architect al-Mu’allim Muhammad ibn al-Qazzaz left his name and the dates of completion, 1421 and 1422, is above the entrance of each minaret. In Cairo, this signature by an architect is unusual.