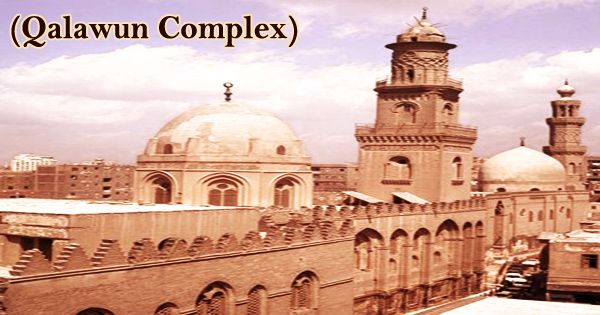 The Qalawun complex (Arabic: مجمع قلاون‎) building complex, including a mausoleum, a madrasah, and a hospital, was built by the fifth Mamlūk sultan, Qalāʾūn, on the site of present-day Cairo, Egypt, in 1283-85. The complex was situated on the street of al-Mu’izz. It is widely regarded as one of Islamic Cairo and Mamluk architecture’s main monuments, noteworthy for the scale and reach of its charitable activities as well as the richness of its architecture. Now in ruins, the hospital was one of the most impressive buildings of the Mamlūk period. Both the mausoleum and the madrasah open from a central passage. The Qalawun Complex was built on the remains of Cairo’s Fatimid Palace, with many halls within it. It absolutely was sold to many people until it absolutely was finally bought by the Sultan Qalawun in 1283 AD. On the richly carved qiblah side (the wall facing Mecca), the madrasah has a distinctive three-part basilica-like eyvān, or vaulted niche, and a smaller eyvān opposite. The central, domed plan of the mausoleum is linked by a long entrance passage to the madrasa and the plan of both spaces is moved to suit the orientation of the qibla. The structure is situated in the heart of Cairo, in Bayn al-Qasrayn, and for years has been the center of important religious ceremonies and rituals of the Islamic faith, ranging from the Mamluk dynasty through the Ottoman Empire. 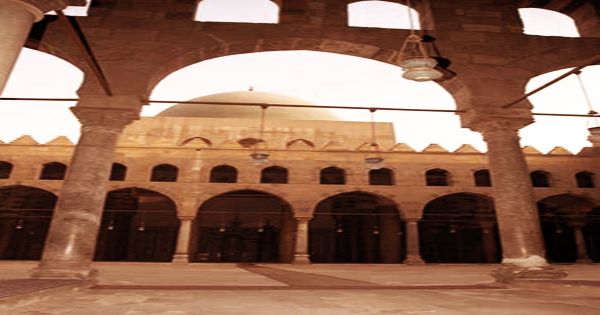 (Entrance to the royal mosque adjacent to the Qala’un complex, Cairo)

The other faces of the madrasah are dominated by residential cells for scholars. It reportedly took 13 months to construct the funeral complex of Sultan al-Mansur Sayf al-Din Qalawun, including both the madrasa and the mausoleum, from 1284-1285. Considering the sheer size and complexity of the overall complex, this reality is remarkable. In the square space of the richly decorated mausoleum, a small atrium with a fine carved stucco façade leads to the pink granite columns surmounted by arches supporting a dome which was possibly originally wooden. Throughout the complex, rounded horseshoe arches, rare at this point, are used. At the time, the complex was considered to be one of the most beautiful structures, including a school (Madrasah), a hospital (Bimaristan), and a mausoleum with a beautiful dome. In the 18th century, the octagonal building was roofed by a dome that was demolished. In 1903, Max Herz Bey constructed the present concrete dome, which is a copy of that covering the Mausoleum of al-Ashraf Khalil ibn Qalawun (1288). By means of wooden muqarnas, the octagonal base is turned into a circle. 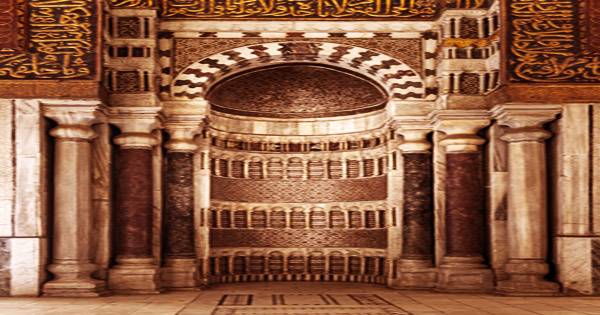 In Mamluk architecture, the exterior structure of the Qalawun complex has many special firsts. The buildings’ exterior facades are adorned with vertical, flat-backed, arched recesses that offer the look of a Norman church. In the recesses, colored glass windows are set, and the walls are topped with crenellation and decorated with geometric sculpted patterns. The minaret is fixed to the mausoleum rather than to the madrasa. The minaret also does not, as was a customary practice of the time, reside near the entrance of the house. Sultan al-Nasir Muhammad erected an adjacent royal mosque in 1318 as a place where the sultans of Cairo could conduct their Friday prayers. As its dome served as a ceremonial center for the investment of new emirs, the Mausoleum of Qalawun is important. Indeed, the dome was a sign of new power, a change of guard, reflecting a new base of Mamluk power, which at that time enjoyed great prosperity. Marble coverings, carved, painted and gilded wood, carved marble, and stucco are part of the extensive interior decoration. Before being demolished in 1910, the hospital functioned through the late Ottoman era. In addition to medical services, the hospital provided many facilities to the ill and needy, including medications, housing, food, and clothes. It is a hypostyle mosque and is unique among other mosques of Mamlūk because the bases of its two minarets are below the level of the roof, as a result of the walls being heightened and the roof was reconstructed in 1335. The elegance of the hospital’s interior was distinguished by large fountains remaining within its walls. A wide central courtyard measuring 21×33 m was also located inside the hospital.