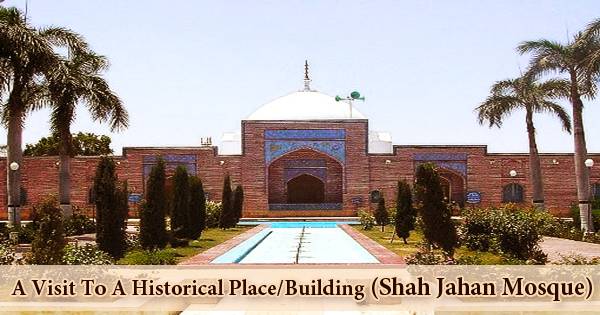 A Visit To A Historical Place/Building (Shah Jahan Mosque)

Also known as the Jamia Masjid of Thatta (Urdu: جامع مسجد ٹھٹہ‎), the Shah Jahan Mosque (Urdu: شاہ جہاں مسجد‎) was built as a gift to the people of Sindh by the eponymous Emperor. It is constructed mainly of heavy brick and is laid out with a wide (52 × 30 meters) courtyard at its center in the normal quadrilateral arrangement. With 93 domes of varying scale, the arcades around the courtyard are covered. The mosque is a building from the 17th century that serves as the central mosque for the town of Thatta, in the province of Sindh in Pakistan. The mosque is considered to have the most elaborate display of tile work in South Asia, and a decorative feature that is uncommon for Mughal-period mosques is also important for its geometric brickwork. One impressive acoustical aspect is that it is possible to clearly hear the prayers of someone speaking loudly in front of the mihrab (the prayer niche facing Mecca) in the building. Thatta is an ancient city with a history that is as vast as it is rich. As the medieval capital of the Sindh province of Pakistan, over its long history, Thatta has come to know several different rulers. All of these different rulers and their respective cultures have left their effect on this diverse region, but maybe no one has left an influence on the city more than the Mughal Emperor Shah Jahan of the 17th century. Amongst the Sindhi people of Thatta, Shah Jahan sought refuge. Shah Jahan wanted to erect one of the most beautiful mosques in the world right there in Thatta, touched by their friendly hospitality towards him. In the 16th and 17th centuries, before Sindh’s capital was relocated to nearby Hyderabad, the mosque was situated in eastern Thatta, the capital of Sindh. It is situated next to the UNESCO World Heritage Site, the Makli Necropolis. The site is situated about 100 kilometers from Karachi. It is assumed that Shah Jahan also paid for the building of the complex entirely with cash from his own imperial treasury. In 1637, just 10 years before the construction of the mosque, the city was almost completely wiped out by a flood, so it must have been quite a sight to see such a great and vibrant building rise over the almost ruined city. 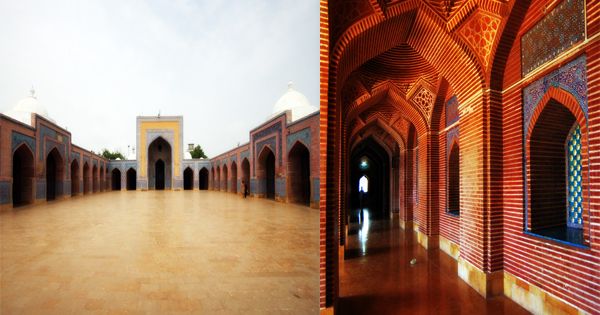 A 169′ × 97′ courtyard centers around the mosque, a heavy brick building of simple construction constructed on a stone plinth, with heavy square pillars and massive walls. The chamber of prayer is close in size. Big domes cover both of them. Two aisled galleries open to the courtyard through arcades to the north and south. Ninety-three domes cover the entire structure and are probably the source of a remarkable echo that allows every part of the building to hear the prayers in front of the Mibrab. It was not until 1658-59 that the building’s eastern portion and the gateway were finished. Subsequent repairs were conducted in 1692 under Emperor Alamgir and in 1812 under the auspices of Murad Ali Khan Talpur, a local chieftain. During the British era, further renovations took place in 1855 and in 1894. The architecture of the mosque is what makes this site so special, as well as a must-see on anyone’s trip to Pakistan’s Sindh region. The building is a blend of styles from the Central Asian influences of Turkish, Persian, and Timurid. The building is very unique in that it is one of the few mosques with almost no minarets present. The mosque does, however, boast 93 domes, more than any other building in all of Pakistan. In the Indo-Pakistan sub-continent, the mosque features the most intricate display of tile-work. The two principal chambers, in particular, are absolutely filled by them. With a mosaic of radiating blue and white tiles, their domes were exquisitely laid out. Stylish floral patterns decorate the spandrels of the main arches, comparable to Iran’s Kashi work of the seventeenth century, and geometrical designs on square tiles are disposed of in a sequence of panels elsewhere. To represent the celestial atmosphere of the sky, the inside of the main dome is painted with stellar patterns of blue, white, red, and yellow tiles. The main dome’s walls are also littered with exquisite Arabic calligraphy.