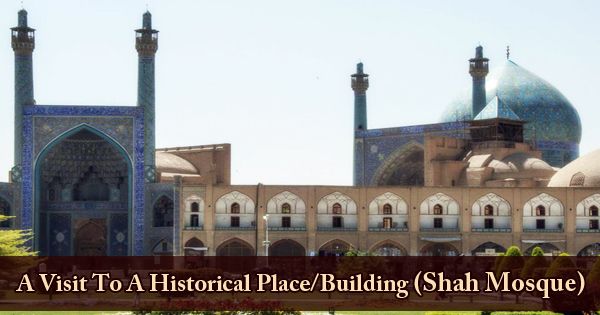 A Visit To A Historical Place/Building (Shah Mosque)

The Shah Mosque (Persian: مسجد شاه‎), also known after the Iranian Revolution as the Imam Mosque, is Shah Abbas’ exquisitely rendered creation. Located in Isfahan, Iran, it is a mosque. It is situated on Naghsh-e Jahan Square’s south side. The mosque was situated in the center of Eṣfahān, along a wide central mall (city square, or courtyard) called the Maydān-e Emām, part of the reconstruction effort of the Ṣafavid shah ʿAbbās I (since 1979 a UNESCO World Heritage site). It was constructed under the order of Shah Abbas I of Persia during the Safavid dynasty. It is considered to be one of the masterpieces of the Islamic age of Persian architecture. The Royal Mosque is registered as a UNESCO World Heritage Site, along with Naghsh-e Jahan Square. In 1597, Shah Abbas relocated the capital of the Safavid dynasty to Isfahan with the intention of focusing on political social, economic, and cultural activities, shifting the center of Isfahan away from the area around the old Friday mosque in the north and bringing it closer to the Zayandeh River. The Masjid-i Shah was the largest architectural memorial to Shah ‘Abbas. Its construction started in 1611, and its elegance is largely due to the beauty of its seven-color mosaic tiles and calligraphic inscriptions. As the orientation of the qibla (the prayer wall facing Mecca) was not in line with the axis of the square, the design of the mosque proved quite difficult. By orienting the mosque in the proper direction and linking it to the square through a bent passageway, the architects solved this issue. The solution is not completely elegant since it is clear that the mosque is off its axis from most of the square, but this does not detract from the elegance of the mosque. On the reverse of the Iranian 20,000 Rials banknote, the mosque is depicted. 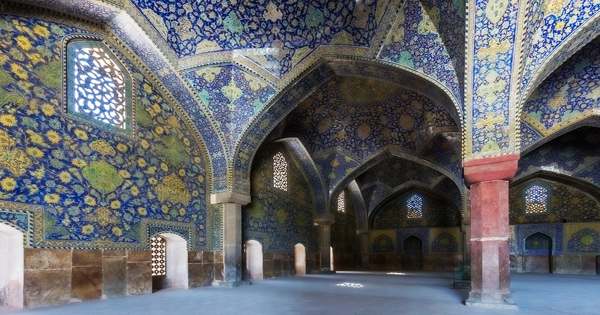 (Interior view of the winter mosque, built as a typical hypostyle mosque)

The monumental Iwan portal of the mosque is situated exactly opposite the Iwan portal on the Maydan’s northern arcade, which connects the Maydan to the old bazaar to the north. Construction of the Masjid-i Shah started under Shah’Abbas in 1611 and was completed around 1630 during the reign of Shah Safi, the successor of Abbas, who ruled from 1629 to 1642. Later, in 1638, the structure was integrated with marble dice. From the inscriptions installed on the structure, which recognize Badi’ al-Zaman Tuni as responsible for the building plans and site arrangement,’ Ali Akbar Isfahani as the architect, and Muhibb’ Ali Beg as the general contractor, much is known about the people involved in the construction of the mosque. The entrance-iwan (gateway) to the mosque, standing in the public square, or Maidan, takes the shape of a semicircle, resembling a recessed half-moon and measuring 27 meters in height, an arch framed with turquoise decoration and decorated with rich stalactite-like tilework called muqarnas, a distinct feature of Islamic Persian architecture. Two 42-meter-high minarets rise on the tops, topped by beautifully carved wooden balconies with muqarnas running down the sides. The rectangular form of the rest of the mosque (100 by 130 meters) is rotated 45 degrees to orient it toward Mecca, where the qibla wall is placed. The main portal is linked to a triangular vestibule to achieve this orientation towards Mecca, connecting it to the courtyard of the mosque through the space behind the northeastern iwan. A small pool and a resting place for the horses stood in the middle, in front of the entrance, and inside the worshipers found a large marble basin set on a pedestal, filled with freshwater or lemonade. This basin is still as it has been for 400 years, but at Friday prayers it no longer serves the purpose of offering refreshments to the worshipers. The Masjed-e Emām (Shah Mosque) is notable for its logically correct vaulting and imaginative use of colored tiles, along with the three neighboring structures of the time, and the mosque was renamed after the 1979 Iranian Revolution.