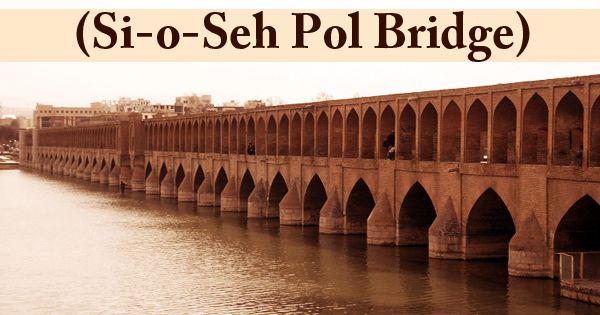 The Allahverdi Khan Bridge (Persian: پل الله‌وردی خان‎), popularly known as Si-o-Seh Pol (Persian: سی‌وسه‌پل‎, literally means ‘The Bridge of Thirty-Three Arches’) in Isfahan, Iran, is one of eleven Isfahan bridges spanning the Zayandehrud River. The bridge was constructed to act as both a bridge and a dam in the early 17th century. It is a popular meeting place for leisure and is one of the most prominent examples of the Safavid architecture of Iran. It was built during the reign of Shah Abbas by Allahvardi Khan, a general. Due to its height, central position, and prominent architecture, it is the most popular Isfahan Bridge. The bridge is a nightlife hub in the city that draws Iranians as well as international tourists. Bridge-building started in 1599 and finished in 1602. The bridge is 298 meters long and 13.75 meters high. It has 33 spans from which it gets its name, crosses the Zayandeh River, and is situated at the southern end of Chahar Bagh Avenue with the longest span of 5.6 meters. It was built under the supervision of the commander-in-chief of the armies, Allahverdi Khan Undiladze, who was of Georgian descent and was named after him as well. In particular, the bridge served as a connection between the elite mansions, as well as a link to the crucial Armenian neighborhood of New Julfa in the area. 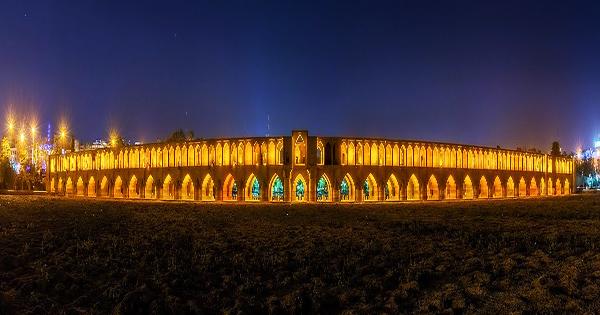 The bridge is made of yellow bricks and limestone, the traditional materials for structures of the Safavid period. The niches provided by the arches are ideal for sitting and chatting while enjoying the city view. For a while, one of the arches housed a tea house, but it was closed later on. The bridge’s central roadway is wide enough to allow horse-drawn carts and other animals to move through without difficulty, while the bridge’s sides have elevated pedestrian traffic paths. Along both sides of the bridge, pavilions allow pedestrians to view the river when crossing it. At the beginning of the bridge, there is a larger base plank through which the Zayanderud flows, supporting a tea house that is abandoned nowadays. Si-o-Se Pol ties the streets of Chahar Bagh-e Abbasi and Chahar Bagh-e Bala, which is literally their extension. It is situated in the center of town, within walking distance of the main attractions of the city. There is Vank Cathedral and the Isfahan Music Museum on the southeast side of the bridge. At the north end of the bridge, there is the Si-o-Se Pol metro station and numerous bus stations, shopping centers, cafes, and hotels. The upper-level road is bounded by two high walls that shield travelers from falling winds and pedestrians who can walk there. Si-o-se Pol Bridge is considered the largest water-based Iranian building. When it gets dark, hundreds of lights light up the bridges and they are beautifully mirrored in the waters of the river.