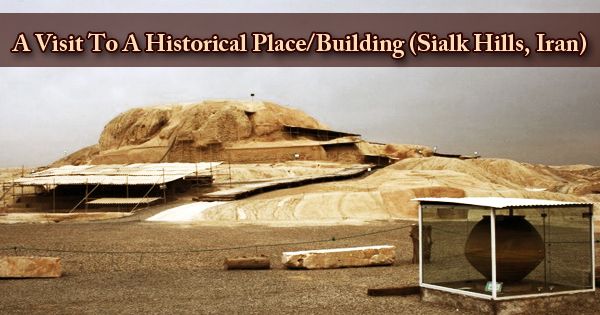 A Visit To A Historical Place/Building (Sialk Hills, Iran)

Sialk Hills is a large ancient archaeological site, also known as Tepe Sialk (Persian: تپه سیلک‎), located in the suburb of Kashan, Isfahan province, near Fin Garden in central Iran. Some written records belonging to the Achaemenid Empire have been found on this site. The culture that populated this region was associated with the culture of the Zayandeh River. Before the great flood that led to the discovery of Sialk Hills, this mysterious part of town was called “The Cursed City” by the citizens of Kashan and no one dared to get near to this dreadful location. To define this structure, the word “hills” may not be appropriate; it is actually a Ziggurat (a rectangular stepped tower, often surmounted by a temple) often made of clay. Many tools and pottery with various interesting shapes were discovered after the flood. After a while, Roman Ghirshman, a famous French archeologist specializing in ancient Persia from the Louvre Museum, traveled to Iran to begin excavating this unique historical site with his team. A significant part of the Sialk Hills treasure is now preserved in the Paris Louvre Museum as a result of his discoveries. In reality, Sialk Hills is a Ziggurat (a religious place of worship built by the civilization of the Elamites) with 3 floors made of clay and pottery. The pyramid-shaped Ziggurat was built for the major cities of Mesopotamia. Each generation buried their ancestors in a brickless cellar, the corpses with their ornamental artifacts buried in the squatting mood. 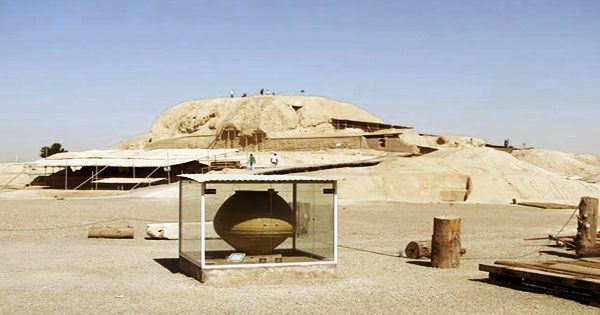 No one paid attention to Sialk Hills until 2001, when Dr. Malek Shahmirzadi began new excavations in five sessions, despite Ghrishman’s findings and research results, which were published as two books in French. For thousands of years, the Cheshmeh ye Soleiman (“Solomon’s Spring”) has been carrying water from nearby mountains to this area. A common tourist attraction is the Fin garden, built in its present form in the 17th century. This is where the Safavid dynasty kings will spend their holidays away from their capital cities. There are two northern and southern hills in the Sialk Hills, 600 meters apart, and two cemeteries. One of the two cemeteries, situated 200 meters south of the southern hill, is 3500 years old. The other is 3000 years old and is situated on the western side of the hills under agricultural farms. In the Sialk Hills, these are the oldest and deepest layers. People of this period would have cottages made of straw and branches based on Ghrisman’s observations, and they would cover them with mud. Their pottery was produced in special ovens. The first appearance of metallurgy is seen at the stage of Sialk II. In the buildings of this era, the archaeological material found testifies to growing ties with the outside world. 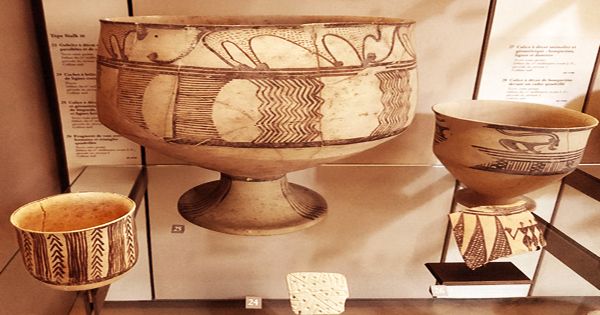 Sialk people migrated from the northern hill to the southern one around 6100 years ago. They even keep burying dead bodies on the foundations of their houses. But when they began to use the pottery wheel, the most important thing about this period happened. This tells us that the population should have grown and that they have to use more productive ways of meeting the needs of the customer. They used human forms to design their handicrafts this time. Even, using silver as the key material, their jewelry was modernized. The first refers to the fifth millennium and the beginning of the fourth millennium, separated into seven sub-periods (c. 4000 BC). This period is in continuity with the previous period and sees the complexity of architecture (molded bricks, stone use) and crafts, especially metallurgy. Evidence demonstrates that during the Sialk III and Sialk IV periods, Tepe Sialk was an important metal production center in central Iran. During excavations in the 1990s and later, a large quantity of metallurgical remains was found. This involves huge quantities of bits of slag, lithium-sized cakes, crucibles, and molds. After more than a century of abandonment, in the second half of the second millennium, the Sialk site was reoccupied. New migrants have arrived here in the Sialk V period, which goes back to 3200 years ago. They brought with them gray pottery, and one more thing: they did not bury the dead in their houses. There they built a cemetery with their precious belongings on the southern side of their city, as they believed in other lives. New migrants constructed another house and cemetery in Sialk VI during the remaining duration of the fifth age. They modified the burial customs a little, turning the arcades of the graves into a structure in the form of a hill. Overall, on this site, more than 200 graves have been discovered.