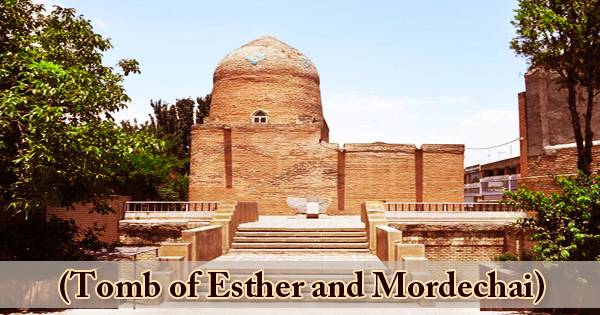 The Tomb (Mausoleum) of Esther and Mordechai (Persian: بقعه استر و مردخای‎ Buqʿah Ester w Murduxay, Hebrew: קבר אסתר ומרדכי‎ Qever Estēr v’Mórdǝḵay) is located in Hamadan, Iran. Hamedan is renowned as Iran’s capital of history and civilization; the remaining city of Ecbatana, stone lion, inscriptions of Ganjnameh, mausoleums of Avicenna and Baba Tahir, Alavian dome, etc., caused this city to be launched in 2018 as the Tourism Capital of Asian Countries. Iranian Jews claim that it is home to the remains of the biblical Queen Esther and her cousin Mordechai, and is Iran’s most important Jewish pilgrimage site, designated a World Heritage Site by the Government of Iran in 2008. During the reign of Ahasuerus, a Persian king who is also known as Artaxerxes, Mordechai, and Esther lived (possibly Artaxerxes II, who lived from 435 or 445 to 358 BCE). There is no mention of it in either the Bavli or the Jerusalem Talmud, and Jews outside Iran have not supported the Iranian Jewish tradition. The site is also a year-round pilgrimage site for Iranian Jews, especially on Purim. Although the original date of the building of the shrine is uncertain, its date of destruction reportedly occurred in the 14th century, at the hands of Mongolian invaders. It is recorded that when Esther and Mordecai were buried there, 50,000 Jews lived in Hamadan. This sanctuary was one of the reasons why the Jews lived in Hamadan, and it is still a pilgrimage for them. Jewish pilgrims come to this mausoleum to celebrate the Feast of Purim at the end of each year (14th of Adar). 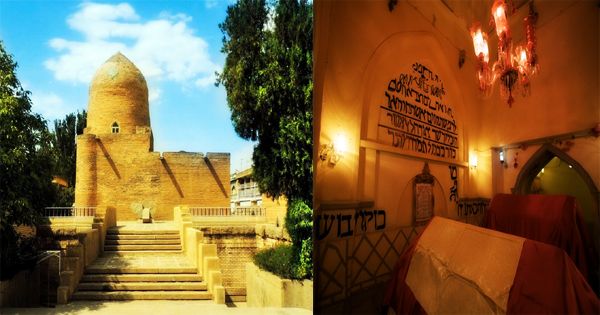 (Tomb of Esther and Mordechai; and Interior view of the tomb)

At Hamadan, inside a mausoleum believed to have been built in the 1600s, there is a tomb of Esther and Mordechai and it is first attested in the 11th century. A little walk from Imam Khomeini Square, an old and original street with historical buildings such as the Qajar house, seminary, and houses with Pahlavi balconies, enter Sharitati Street. The tomb of Esther and Mordecai is also located just in front of the seminary of Zanganeh, in an alley that is not so large. A French explorer at the beginning of the 20th century, according to the National Library of Israel, found jewels in a niche situated in the ceiling of the mausoleum and deposited them in the Louvre. A crown among the cache, it adds, is assumed to belong to Esther by the Hamadan Jewish community. Esther was a handsome Jewish girl who was chosen in Persia to be King Xerxes I’s wife. She lived with Mordechai, her cousin, and guardian, in Iran. Mordechai angered Haman, the king’s chief strategist, who then wanted to take revenge for killing all the Jews in the Persian Empire. Queen Esther was able to foil this scheme, saving the Jews and instead of leading to the end of the life of advisor Haman. After that, Mordechai was positioned as an advisor to the king. In the history of the Jewish people, both Esther and Mordechai were known as prophets. Many years ago this region was the Jewish settlement and the land around the tomb was also the Jewish community’s cemetery. During the reign of Naser al-Din Shah, a large landowner occupied a part of the cemetery and the cemetery was moved to another position by his order. Some parts of this cemetery and the area of the mausoleum were destroyed several years later, during the time of Pahlavi I, by the extension of the road.

The tomb was identified in 1891 as comprising an external and internal chamber surmounted by a dome about 50 feet (15 m) tall. Blue tiles had covered the dome, but most of them had fallen down. Within the outer chamber were a few tombs of worthy Jewish individuals. Until the 1970s, in a crowded area of Hamadan, surrounded by buildings, the shrine was tucked away and accessible only via a narrow dirt alley. But in the early 1970s, the site and its premises underwent a significant renovation project. Houses have been bought and demolished around the tomb, rendering the shrine available from the main street. However, the restoration did not change the shrine itself substantially, or the gravestones cluttering the plaza outside the old shrine. In front of tourists, the mausoleum building with a square, the domed plan made of brick and stone doors appears. In reality, in the past, the door was locked from within and a key would open and close it. Later, several modifications were made in the building during 1980 restorations, one of which is the replacement of the metal lock. Whether the tomb of Mordechai and Esther is the actual site where they were buried is not known. A parallel tradition holds that their bodies have been carried for burial to Baram, a site now in Israel. The site in Hamadan, in any case, has been respected for at least eight centuries. Traditionally, Iranian Jews fly there to read the Megillah every Purim.