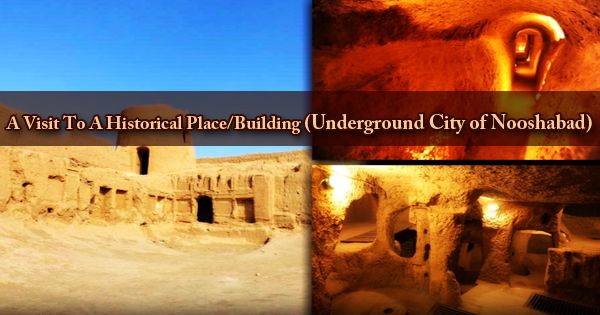 A Visit To A Historical Place/Building (Underground City of Nooshabad)

Nushabad Underground City (or Nooshabad or Noushabad) is located in the central district of Aran Va Bidgol County, Isfahan Province, Iran, about 5 kilometers north of Kashan. In Persian, Noosh means tasty cold water, and Abad is a prefix, so overall it means a city with tasty cold water. The people of Nooshabad, who were the capital residence, began digging one of the most amazing underground structures in Iran about 15,000 years ago in the pre-Islamic period, especially during the reign of the Sassanid dynasty. Due to the fear of enemy invasions, they created this secret city. For this town, they used high-intelligence methods so that it was unknown to present Nooshabad residents until 2006 when one of the residences accidentally discovered this place when he tried to dig a well in his house. The construction of this man-made underground town, named Ouee (or Ouyi), dates back to the Empire of Sasania (or Neo-Persian), which ruled from 224 to 651. In the event of an assault by foreign invaders, inhabitants will dig underground chambers as hiding places for women, children, and the elderly. Originally, this remarkable tunnel complex, 8 km north of Kashan, grew around a freshwater spring, credited with providing delicious, crystal-clear water. Today, only part of the tunnel system is accessible to tourists and these sections are frequently subject to flooding (note the two-color tone of the walls reflecting the level of the flood), but even a simple descent to the first level gives an idea of the difficulty of this ancient project of engineering. 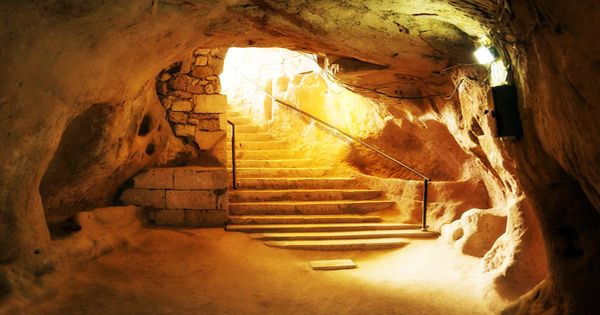 The height of the entrances is 170-180 centimeters (except for the largest one); nearly the same as the normal human height. Some channels linking the first floor to the ground surface (like qanat) functioned as air conditioners and entrances. It is on Iran’s National Heritage List. While some large parts of this city cannot be excavated because of the water and waste leakage into it, overall, three floors of this man-made city were found 4-18 meters from the surface of the earth. It is the largest underground city in the world. At one-meter intervals, there are remaining 700-year-old fat-burning lamps on walls. On the upper floor and in this way, they also considered several tunnels; the fresh air circulated throughout the area. The original intention of the tunnels and chambers dug around the original well may have been to provide a respite from the summer heat of the desert, but they also seem to have had a further role in enabling people to travel from one part of their city to another without having to face possible enemies. Ventilation shafts permitted underground prolonged residency, and the spring ensured fresh water. Finally, in the 1920s, the tunnels were abandoned and discovered by mistake when someone dug a well in their house and stumbled into the labyrinth of chambers below. Other Nushabad tourist attractions include its 20 qanats, which are situated about 15 kilometers north of Nushabad, parallel to each other; Atiq Jame’ Mosque, said to be a fire temple before Islam, registered on Iran National Heritage list; Ishaq Abad Bridge dating back to Seljuk period; Matinabad eco-resort, Iran’s first and only eco-resort; Safavid water reservoirs and castles and the magnificent nature of the desert.