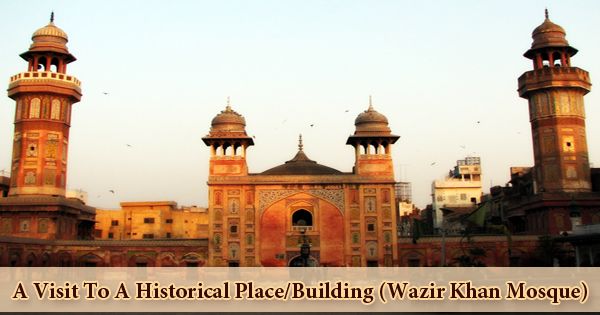 A Visit To A Historical Place/Building (Wazir Khan Mosque)

The Wazir Khan Mosque (Masjid Wazīr Khān) is the most intricately decorated mosque of the Mughal period of the 17th century which retained its position as the main place of worship in the old town of Lahore, the capital of the Punjab province of Pakistan. This mosque and its associated structures were founded in 1044-45 AH by Hakim’Ilmuddin Wazir Khan, the Subedar of Lahore during the reign of Emperor Shah Jahan (1634-35 CE). This was the largest mosque in Lahore at the time, situated about 260 meters within Delhi Gate, with the building of the Badshahi Masjid still fifty years away. During the reign of the Mughal Emperor Shah Jahan, the mosque was commissioned as part of an ensemble of buildings that also included the nearby Shahi Hammam baths. In 1634 C.E., construction of the Wazir Khan Mosque started and was completed in 1641. It is on the Tentative List of the UNESCO World Heritage. In Lahore, Wazir Khan acquired a large tract of land bordered on the east by the Delhi Gate and on the west by the Lahore Fort. On the site of the tomb of Syed Muhammad Ishaq (also known as Miran Badshah), a saint who had migrated from Iran in the 13th century, he founded the mosque that now bears his name. A bathhouse (Shahi Hammam) and other commercial establishments were also built by Wazir Khan along the road to the mosque, whose income was intended to ensure the perpetual maintenance of the mosque. The bazaar to the east of the mosque was very prosperous and remains a thriving market even to the present day, although the bathhouse did not provide as much revenue as expected. Since 2009, under the direction of the Aga Khan Trust for Culture and the Government of Punjab, the mosque has undergone comprehensive renovation, with donations from the governments of Germany, Norway, and the United States. 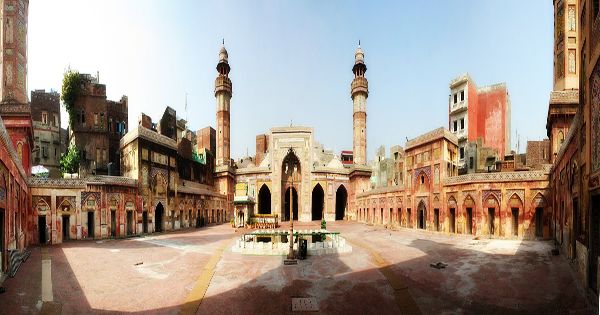 The mosque is entirely constructed of cut and dressed bricks laid in kankar lime with a scanty sprinkling of red sandstone in the gate and transept, covering an overall area of 279 × 159′. The courtyard is divided into two parts: with the ablution tank in the center, the upper portion is around 6′ higher than the lower. The courtyard is flanked by 32 small hujras of varying sizes on its east, north, and south sides. The abundant architectural decorations that embellish the mosque’s exterior and interior surfaces are the unique outstanding feature that positions the mosque at the forefront of the world’s great monuments. Glazed tile mosaics (kashikari), frescos (naqqashi), typical engraved lime plaster, and cut-and-dressed brickwork are included in this extensive ornamentation. In Arabic and Persian, delicate calligraphy portrays verses from the Quran and the Hadith includes references to the date of the mosque’s building and recognizes its founder and the Emperor. There are also motifs of cypress trees in the mosque, and it is the first Mughal monument to borrow this motif from Persia. The central hall, designed according to Persian architectural specifications, is the largest prayer hall. The wide dome stands on four arches, which makes the Char Taq more widely known as a square pavilion. The underside of the dome is painted with frescoes that depict an Islamic depiction of a paradise intricately built. The arched niche facing Wazir Khan Chowk at the entrance of the mosque is richly decorated with floral motifs and features one of Lahore’s first examples of the muqarna and architectural features found in the Alhambra in Spain, as well as in many of Iran’s imperial mosques. On the west side, the prayer chamber is split into five compartments by massive piers with broad, four-centered arches and a dome crowning each compartment. A small space has been installed in the central portion at the northern and southern ends of the prayer hall, although there is a gallery opening into the spiral staircase on the eastern end lending to the roof. For religious scholars, the courtyard is flanked on four sides by 32 khanas, or small research cloisters. In each corner of the courtyard are the mosque’s four 107-foot-tall minarets. The four corner minars (minarets), the five domes, and the transept at the east entrance gate are the key structural features of distinction. Of all the mosques constructed during the Mughal era, the Wazir Khan mosque has the best mosaic tile work. The Quran’s verses are seen as exquisite works of calligraphy adorning the walls. Visitors can also discover floral patterns and intricate designs that offer a sense of spirituality and harmony.