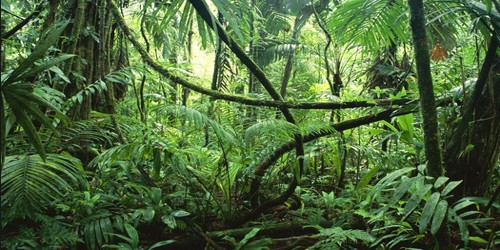 A visit to a Jungle

A visit to a Jungle

One of my long-cherished dreams was to explore a jungle. A jungle or forest is basically a piece of land that encompasses a large number of trees and various varieties of plants. A tropical jungle is an awesome place. I had the opportunity of visiting one recently. The moment we entered the jungle, it became semi-dark. My friend (name), who works as a forest ranger, took me along on one of his trips into the jungle. I had wanted to experience for myself first-hand what he had always spoken about. These beautiful creations of nature serve as a home for different species of animals.

Forests form an important part of the ecological system mainly because they aid majorly in biodiversity. The moment we entered the jungle, a sort of semi-darkness enveloped us. Sunlight could barely penetrate through the leaves of the tall trees. The sky was almost completely shut out by the canopy of leaves high above us. At ground level, thick vegetation grew in every direction. The air was damp and had a peculiar smell to it.

All around us were the sounds of insects, birds, and animals. Though we could not see them, except for some birds, we knew they were there. The sounds echoed all over, making the jungle feel eerie and strange. Walking further, we saw different types of plants and trees. Some of them bore flowers that we had never seen before.  For the first time in my life, I saw strange birds, insects, huge spiders, snakes, and vines as thick as a man’s hand.

I had no idea how (Friends name) could find a way through the bushes and trees. He said he was just following a path used by the aborigines. As far as I was concerned, I could not see any path. I realized then how easily an inexperienced person could get lost and perish in the jungle.

A forest is a large area covered with greenery. Nevertheless, I followed 9friends name) as we trudged along slowly. The most uncomfortable thing about being in the jungle were the leeches. These little bloodsuckers never gave up. Despite thick boots and clothes, they still managed to bite me. The experience was unforgettable. I was awestruck by the might of nature.

The idea of seeing animals has always caught my fancy and it does today, as well. When we emerged from the jungle I felt as though a great weight had been lifted from me. The clear blue sky was a welcome sight. Outside, the world was definitely easier to cope with. The jungle made me feel hemmed in and helpless. Forest is a large wild area left to grow naturally. It was a good experience but I would prefer to remain outside it. Forest Plays a vital part in balancing the ecosystem.