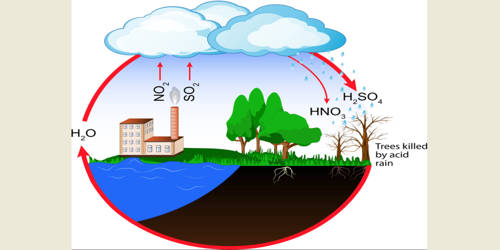 Acid is a chemical compound, usually a liquid that contents hydrogen and has a PH of less than seven. acidic pollutants are harmful particles, such as sulfur dioxide and nitrogen oxides, that turn into acid when they mix with water and oxygen in the sky. Acids are usually sour and can afterburn holes in our damage things they touch. When something is polluted by acid then It is called acid pollution. Acid corrodes things. Acid Pollution can harm the environment in a variety of ways, as by causing the acidification of lakes and streams, the leaching of minerals and other nutrients from the soil, and the inhibition of nitrogen fixation and photosynthesis in plants. These represent the mix of air pollutants that deposit from the atmosphere leading to acidification of soils and freshwaters

Acid pollution can cause damage to trees lakes, wildlife, buildings. Many of the world’s famous buildings are at risk of acid pollution. Damage to the beautiful Taj Mahal in India caused by Sulphur pollution from nearby oil refineries was one of the nest indicators of acid pollution occurring in the developing world. The accumulation of acids that fall to the Earth dissolved in water is known as wet deposition. It mainly consists of pollutants emitted by the combustion of fossil fuels (e.g. power generation). Wet deposition includes all forms of acid precipitation such as acid rain, snow, and fog. The removal of these pollutants from the atmosphere is in the form of wet deposition in rainfall, cloud-water or occult deposition, mist, and dew, but also includes dry deposited acidifying gases. The accumulation of acidic particles that settle out of the atmosphere or of acidic gases that are absorbed by plant tissues or other surfaces is known as dry deposition. Rainfall that is acidic, possesses elevated H+ ion concentrations, and has been commonly known as ‘acid rain’.