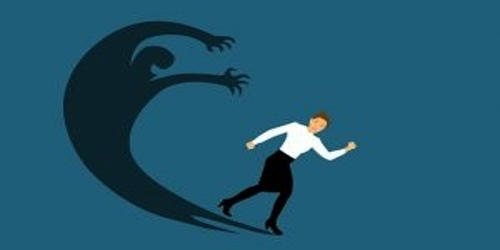 Afraid of own shadow – a Psychological Problem

Afraid of own shadow – a Psychological Problem

Mum could not understand how she could have brought such a classic case of a scaredy-cat into this world.

According to Mum, when I was born, I was one of those smiling, good-natured babies who would not cry or whimper and would sleep the whole night through. She herself had a peaceful confinement month, unlike her colleagues who were kept on their toes the whole night. Mum was so pleased with me.

But immediately after my first birthday, there was a drastic change, I became the most irritable one-year-old monster. I cried at the slightest whim, at even the softest whisper. I whimpered when the lights were switched off. I wanted brightness and darkness was my forsworn enemy.

The electricity bill rocketed with my unreasonable demands to have lights in every room. Mum and Dad despaired. They prayed it was a passing phase but the nightmare continued into my kindergarten years.

Grandma had to be my constant companion when I first attended kindergarten and she had to follow me everywhere I went. Even the teasing and the boos of my little brave companions did not shame me in the least. I was just plain scared to be alone, without a familiar face, although there were twenty other chubby cherubic faces who were sheer daredevils.

When I turned seven quid was enrolled in a co-ed school, my parents had practically to drag me, with hands and legs bound, to school. In those days, there were no rules of child abuse and they escaped scot-free. To make matters worse, I was sandwiched between a dark-skinned Indian girl with white teeth and a fair-skinned yellow-haired English class. Could you imagine the horrors that haunted my first year in post-kindergarten? My parents just ignored my rantings, protests, and tears in the mornings and I had to be in school, rain, or shine.

An unforgettable incident occurred when the imp in the class sneaked a black harmless spider down my collar. I was paralyzed with fear, my face turned chalk white, my hands and legs trembled lifelessly, I was screaming as though I had been murdered. My Year One teacher, a young inexperienced greenhorn, was petrified that her face was whiter than mine and she was transfixed to the ground. Fortunately for all of us, the mischief-maker had the presence of mind to run get the Headmaster who summarily returned the situation to normalcy. Whenever I meet this Year One teacher, there is an instant rapport of those days, and should we be witness to any such scene, both of us would be amused now but on that fateful day, it was no laughing matter at all, not to me.

To say that I was afraid of my own shadow, was an understatement. I soon grew out of these unreasonable fears: afraid of the dark, sudden loud noises, unexplained rattles, and shakes, a shout out of the blue and numerous other silly fears. As I grew older, wiser, and more logical, I relegated these wild imaginations to the recesses of my mind. Frankly, I must admit, occasionally, I swing into unconscious panic attacks. However, I believe them to be the pains and joys of growing up.

I hope that as I mature into a gracious adult from this insecure untutored teenager, I will look at my own shadow and play hopscotch with it.