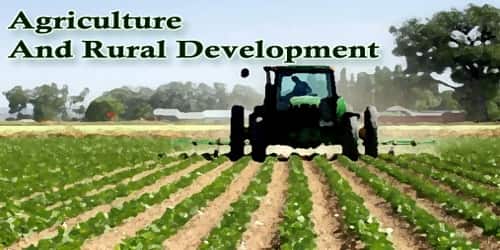 Introduction: Agriculture plays a significant role in rural development by way of employment creation, food production, and livelihood. Nearly 45% of the total world population resides in a village that is roughly 339 Crores. By and large, nearly 60% of the global population i.e. 450 Crores (roughly) depends on agriculture and allied businesses. Villages primarily are agriculture-based economies, not only in developing but also in developed nations around the world. Growth in agriculture produces consequently leads to economical development and poverty eradication. It makes the village economy self-sustainable; however, the overall development of a rural area depends on wide number of factors other than agriculture.

Facts and Figures: Approximately 45% of the World’s population lives in rural areas, that is in terms of numbers of 3.4 billion people. Also, nearly 2 billion people have agriculture as their primary source of income. The agriculture sector also employs nearly 866 million people across the globe. Out of which, approx 75% (656 million) are in south-East Asia and Sub-Saharan Africa. Around 80% of world food is produced by over 500 million farms run by a family. Studies reveal that agriculture is the prime source of income for 65% of the world’s poor adult population. Also, agriculture contributes to 6.4% of the world’s total economic production, which roughly sums up to $5,084,800 million.

Significance of Agriculture: The contribution of agriculture in improving the rural economy is immense. It sustains the village economy by generating food, employment and other related means of livelihood. The agriculture sector is a huge employment provider in rural areas. It provides employment to daily wage labors as well as a skilled workforce in fields as well as other agriculture-related activities.

The agriculture sector is also a mass producer of food, necessary for sustaining human nutritional needs. With low yield or declining agricultural activities, signs of hunger and malnutrition start showing up within no time.

The economic development of a rural area primarily depends on the state of agriculture in that particular area. A decline in agriculture produce will adversely affect the economy. However, over-dependence of rural areas on agriculture and allied sectors for employment generation is also a challenge for the rural economy.

Though agriculture is self-reliance, it is also vulnerable to natural calamities like drought, flood, storms, and pollution. A year of unexpected less rain or drought could put the whole village economy on the back foot in terms of economy. The challenge is, therefore, to make the rural economy more independent of agriculture, by introducing sectors like fish farming, honey bee farming, poultry farming, etc.

Conclusion: Agriculture and Rural Development are the backbones of the economy of a nation. This becomes more befitting in case of developing and underdeveloped economies of the world. In an agrarian economy, the better the state of agriculture is the better will be the development around rural areas. On the other hand, rural development in terms of infrastructure and other sectors creates an environment conducive to the growth of the agriculture sector.