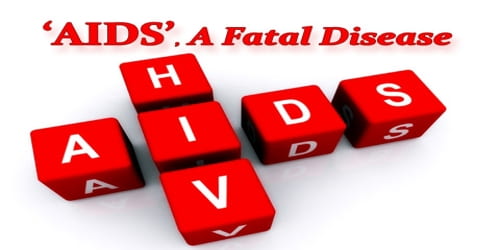 “AIDS” (also Aids) is the abbreviation for ‘Acquired Immune Deficiency Syndrome’. It is a serious disease caused by a virus called ‘HIV’ (Human Immunodeficiency Virus) which destroys the body’s natural protection from infection and which usually causes death. A person can contract AIDS if his or her body’s fluids come into contact with the body’s fluids of someone else who is infected with HIV. Infection with HIV does not necessarily mean that a person has AIDS, although people who are HIV-positive are mistakenly said to have AIDS. Some people who have HIV infection may not develop AIDS for ten years or more. Persons having multiple sexual relation and users of drugs are at risk of developing this disease. As a preventive measure, a person should refrain from having sexual relations with many people. Persons having HIV in their blood should not donate blood and while pushing injection disposable syringe should be used. HIV kills the white blood cells, part of the body’s immune system, which fights off diseases. Over many years the body gets weaker and weaker. More than 50% of the persons who get AIDS Will die. There is no specific treatment of this disease. Without treatment, the average survival time after infection is 11 years. About 36.7 million people were living with HIV and it resulted in 1 million deaths, in 2016. There were 300,000 fewer new HIV cases in 2016 than in 2015. Most of those infected live in sub-Saharan Africa. From the time AIDS was identified in the early 1980s to 2017, the disease has caused an estimated 35 million deaths worldwide. So prevention is the only way to get rid of this curse. Prevention is better than cure. So we should follow this principle to avoid the risks of AIDS.