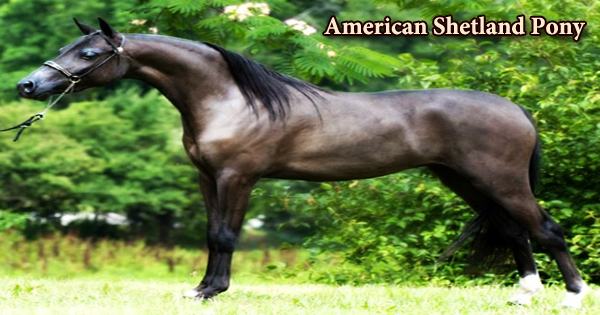 The American Shetland Pony is a horse breed native to the United States that is primarily used for riding and carriage driving. It is descended from the traditional Shetland Pony of the Scottish Shetland Isles but is taller and more graceful as a result of cross-breeding with other horse and pony breeds. Its small stature makes it a perfect ride for kids, while its excellent shape makes it suitable for horse shows. Shetland Ponies originated in the Shetland Isles, northeast of Scotland, where they have been roaming since the Bronze Age. The breed was introduced to the east coast of the United States in the late 1800s for use in coal mines. The new world started breeding them in earnest, appreciating their great strength, good nature, and versatility. It lacks the thick coat of a typical Shetland and, in terms of conformation, resembles a Hackney Pony with some Arab influence. It is the most common pony breed in the United States, with over 50,000 reported in 1994. The Pony of the Americas is one of two American pony breeds descended from the standard Shetland pony. The maximum height of an American Shetland is 11.5 hands (46 inches), but there are other display divisions that allow for different builds. Breeding and success, harness work, and children’s pets are the most popular uses for American Shetland ponies. They can be used in young rider show jumping events, horse shows, and halters. Instead of strength and endurance, horses in halter horse shows are judged on their physical characteristics and suitability for breeding.

The American Shetland is a descendant of a long-extinct breed that originated in the Scottish Shetland Islands. Shetland ponies were introduced to work in the mines as America’s coal industry expanded in the 1800s. In this century, mechanization put an end to the pony’s mining career. The American Shetland Pony is now bred with an eye for show ring appearance. It has evolved into a polished animal with a graceful gait and high-stepping movement. The American Shetland has become a widely sought-after breed. In 1885, Eli Elliot imported 75 Shetland Ponies to the United States, which was the first recorded importation. The American Shetland Pony Club, a breed association, was established in 1888. The original stock was crossbred with a number of other breeds, mainly the Hackney Pony, but also Arabian, Harness Show Pony, and Welsh breeds. Because of its small scale, the American Shetland Pony stands out. The mature pony’s height must not exceed 46 inches (11.2 hands) in order to be licensed. It is 42 inches long on average (10.2 hands) and can be as short as 26 inches. This pony comes in a number of colors, including dun, roan, bay, and black. Hackney Pony’s blood has been extensively mixed into the American Shetland. It has a refined head that can look almost “Arabian” at times. The legs are clean and the body is compact and muscular yet smooth. Long fake hooves and false tails are also fitted for shows. Some American Shetlands still look like the shaggy little British Shetland. Landing on a new continent changed the course of their future, as it did with many other breeds brought to the Americas. Different types of animals were needed by breeders in various areas and disciplines. In their registry, the American Shetland Pony Club recognizes four distinct types of ponies.

It is the most common pony breed in the United States, with over 50,000 reported in 1994. The Pony of the Americas is one of two American pony breeds descended from the standard Shetland pony. Another Shetland-derived breed, the German Classic Pony, was heavily influenced by it. The American Shetland is known for its gentle temperament and willingness to learn, as well as its gentle nature and agreeable disposition. It is known for its toughness and athleticism. As a result, the American Shetland Pony is an excellent option for children and people with disabilities. With these characteristics in mind, the American Shetlands, as well as their much flashier and taller versions, are suitable for horse shows. Even though the American Shetland is amiable and polite, it still has a stubborn streak. If faced with the task of breaking this stubborn streak, the owner of this breed must know how to treat it properly. The harness-trained American Shetland Pony is an excellent choice. It can be used as a roadster to pull sulkies or as a fine brace to pull two- or four-wheeled carts. It is often seen at Halter and can be ridden in either a Western or an English saddle. American Shetland ponies come with a wide variety of prices. In certain places, a good pony can be had for a very low price. Prices, on the other hand, can be incredibly large. In the United States, nearly 40,000 American Shetland ponies have been registered.