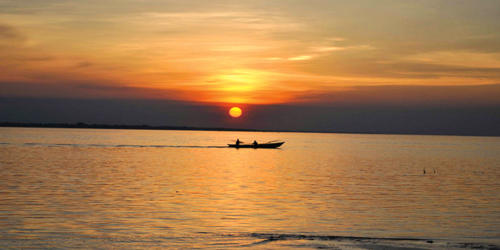 An Autobiography of a River

An Autobiography of a River

From the mountains, I came to the hilly regions of Tibet. Then I began to flow through the north of India. Both of my sides became wider here. I have enjoyed people, cities, villages, green fields, and vegetations on both sides. I am the main distributary of the Ganges, flowing generally southeast for 120 kilometers (75 mi) to its confluence with the Meghna River near the Bay of Bengal. I like to see the little boys and girls swimming and jumping in my water. The housewives taking their bath and filling their pitchers with water attracts me too.

I make the soil of Bangladesh fertile with silt I bring. The peasants are blessed with my water and produce plenty of various crops and fruits. But one day the Indians diverted me to Kolkata. I was filled with grief. They built a big barrage which is known as Farakka Barrage.

My youthful vigor and my flow became feeble. In the dry season, my bed becomes dry. I feel pity for the toiling people of Bangladesh. They cannot dredge on me for want of money. I become thinner and thinner. The green fields look dull and gloomy in summer because of losing my flow. During the rainy season, I become fearful and submerge my banks. I damage the standing crops on both sides. Both banks are flooded because my bed cannot hold water. My heart is filled with sorrow to see the misery of the people during the flood.

I am used to the people of Bangladesh in many ways. The plain land here is made of the silt which I bought from the time immemorial. The farmers use my water for cultivation. Fishermen earn their livelihood by fishing in me throughout the year. I am abounding with “hilsa fish.” It is the most delicious fish in the world. People use me as a major channel of communication and trade. Steamers, boats, launches carry passengers and commodities when I am filled with vast water. Many poets were influenced by my beauty. Even the great poet Tagore wrote many poems during his journey by boat in me.