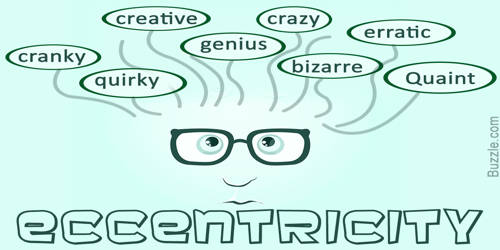 An Eccentric Person – an Open Speech

An Eccentric Person – an Open Speech

Kevin strikes most adults as eccentric. Their nickname for him is ‘Spacey’. They also refer to him as that “weird guy who never grew up”. They say his hobbies and `passions’ do not last longer than a few months.

His oldest sister Kim and her husband indulge Kevin. Yet they have never said a nice thing about him in front of their children, who adore him. They speak disapprovingly about him to their children, but they have never turned him away. Maybe they feel sorry for him, as he lives alone. He had been married once, for a very short time, and has no children. ‘Which woman can put up with him?’ is a familiar comment about Kevin from the adults.

Uncle Kevin’s visits are always fun and exciting. Once he took an assortment of creatures to Kim’s house. The children had been pestering their parents for a pet, a small one, and he knew that their parents had said adamantly, `We don’t want to hear any more of that, do you understand?’ And there was Uncle Kevin, with a snake, an iguana, a frog, hermit crabs and different kinds of slugs. The creatures were all housed in plastic and glass containers. Kim screamed and banned them from the house. So the children played with them in their tiny garden. Uncle Kevin taught them a lot of interesting things about those creatures. He also said he was going to open a pet shop selling small animals. Kim predicted that this project would be abandoned as soon as he took up a new hobby.

True enough, he turned up one weekend wearing an apron and a chef’s hat. He was loaded down with paraphernalia of cooking utensils, piles of vegetables, and jars of spices. Announcing that he had taken up cooking and was going to be their `chef’ for that weekend, he marched straight to the kitchen. Although Kim shook her head despairingly and said, `Another new hobby?’, she did not try to stop him.

The children were breathless with excitement and anticipation. Chasing his sister out of the kitchen but allowing the little ones to be present, he proceeded to wash, chop, slice and heat up several pots and pans. They watched him, fascinated. He clowned around and parodied Bollywood movie scenes while he cooked.

Their favorite part of the cooking sessions was when he made them taste what he was preparing. Some of the stuff tasted strange, but every time someone grimaced, he asked for suggestions on how to improve the dish. At the dinner table, the tastier dishes were quickly eaten up, and the less popular ones were finished by Kevin himself. Nothing was wasted. After each meal, his sister made sure the children helped with the dishes.

He has declared that he wants to start a restaurant. Who knows what will become of that plan, says his brother-in-law. As for the children, they cannot wait for his next visit.