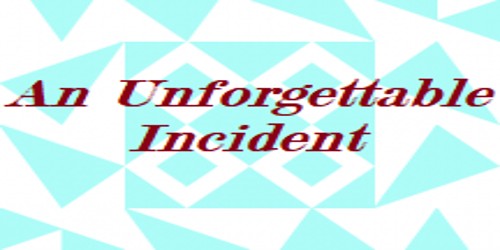 Dark rain clouds were gathering in the sky. I was cycling as fast as I could to get home before the downpour. When I felt a few big drops on my head, I decided to head for a bus stop, about a hundred meters away. As I was nearing the bus stop, I saw a lady rushing towards it from the opposite direction, tugging a little boy behind her. The little boy was finding it hard to keep up with her, so, finally, she just picked him up and carried him.

Suddenly, a motorcycle roared past me, almost knocking me down. “Hey! Are you mad!” I shouted at the motorcyclist. He turned to look at me, and for a split second, I saw his face – cruel, glaring eyes and menacing expression. However, he just sped on. Then, I realized that he was heading right for the woman and little boy!

“Watch out! Watch out!” I shouted. I saw the lady turn to look at the motorcyclist, dismay etched on her face.

In an instant, the motorcyclist had reached the lady. He stretched out an arm and grabbed hold of her handbag, hitting her on the back at the same time. The impact sent the lady hurtling forward. The mother and child fell on the road, landing right in the path of a van.

“Stop! Stop!” I screamed at the van driver, waving my arms wildly in the air. Thankfully, the driver had seen what was happening. With a squeal of brakes, the van stopped a few meters from the spot where the mother and child lay sprawled on the road.

I saw the lady crawling on the road towards the wailing child. There was blood all over them. Tossing my bicycle to the side of the road, I ran to help them. By the time I got there, the van driver had reached them. He was cradling the child and examining his limbs.

“I think your little boy is all right. Nothing is broken,” he said. “How about you? Do you feel pain anywhere?”

“Please help me. I am pregnant,” the lady replied, weeping.

“Don’t panic. You’ll be all right. I’ll take you and your son to a hospital,” said the man.

The lady could not walk, so the man carried her and settled her in his van. I carried the whimpering child to the van. The man asked me to go along with them so that I could help make the police report. I realized that, by this time, the motorcyclist would have gone far from that spot, with the lady’s handbag.

A few days later, I was told that the lady had suffered only minor injuries from the incident. She had some rather deep cuts on her face and limbs, and her knee was twisted. Thankfully, her unborn baby was unharmed. The snatch thief was never apprehended and I doubt I will ever see him again. However, I will never forget the menacing look he had given me.