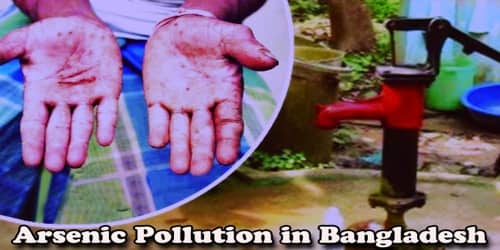 Arsenic is a very poisonous white compound of a frail element which is found in various metals, II is also found in trace amounts in human tissues. In higher doses, arsenic compounds are extremely poisonous. The contaminated groundwater is another source of arsenic. At present arsenic contamination in drinking water is one of the severe problems of Bangladesh. It is estimated that of the 121 million inhabitants of Bangladesh 35 million to 77 million are at the risk of arsenic. They suffer immensely. The National Drinking Water Quality Survey report used an estimated national population of 164 million to estimate that 22 million and 5.6 million people are drinking water with arsenic concentrations > 50 µg/L and > 200 µg/L, respectively. The effect of arsenic pollution is dangerous. This polluted water causes many serious diseases in the human body such as arsenicosis, sores, stomach troubles, gangrene, etc. There is a major increase in the number of cases of diseases caused by arsenic. The application of benzoic acid ointment and regular intake of vitamin C and E-enriched multivitamin tablets is the medical treatment of the people who suffer from arsenicosis. So the people who eat a balanced diet containing fish and vegetables are less affected with arsenicosis. In Bangladesh, ongoing exposure to arsenic in drinking water calls for renewed and sustained mitigation efforts. Exposure to arsenic could be eliminated by 2030 if the government invested a small fraction of its annual GDP growth in providing an arsenic-safe water supply and improving water quality monitoring and surveillance activities. Co-operation from the government and non-government organizations can bring remedy. The remedy for the problem is that people should be made aware of the causes of arsenicosis so that they can get rid of it.