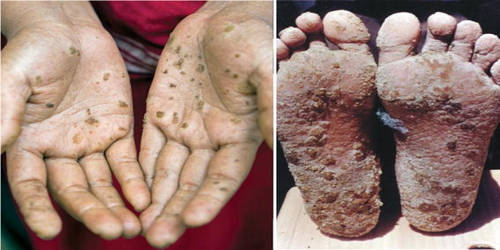 In our day to day life, we experience a new kind of problem. Our environment is facing new pollution day by day. Arsenic pollution is one of them and it seems to be looming larger as the days go ahead. Arsenic contamination of groundwater is a form of groundwater pollution which is often due to naturally occurring high concentrations of arsenic in deeper levels of groundwater. Arsenic is extremely poisonous to humans. It is found as compounds of oxides and sulfides. Countries that have high levels of arsenic-containing groundwater include the United States, India, China, and Mexico.

Arsenic is a tasteless, colorless, and smells less metalloid substance commonly found in groundwater. Contaminated groundwater is the most common cause of this problem. It causes much harm to human life very slowly. It is found in water especially in tubewell water. Drinking arsenic-laden water over a long period of time can lead to poisoning. By drinking arsenic-contaminated water people get diseases in various ways. It causes sore in palms of the legs and hands of people. The people of the affected areas suffer from serious skin disease. But washing hands, clothes, and bathing in this water are not injurious. Sometimes, the sore turn into gangrene and then to cancer. So arsenic pollution is a great threat to human life. The people drinking uncontaminated water are not likely to catch arsenicosis from affected people.

At present, there is no effective medical treatment to prevent arsenic pollution. The best way to treat the condition is to eliminate arsenic exposure. Full recovery may not happen for weeks or months. It all depends on how long you’ve been exposed. To prevent this one should take a balanced diet and arsenic-free water. Vitamin E and selenium supplements have been used as alternative remedies to limit the effects of arsenic exposure. There are also some ways which we can take to prevent this. Like, we should identify an alternative water source instead of using the tubewell water, rainwater can be used and we should make the tube-well in which water is arsenic-contaminated. To check arsenic contamination, people should be encouraged to use surface water of ponds and rivers. Sand Pond Filtration method also can be applied for pure arsenic-free water. There is still no effective cure for arsenic.

Arsenic is a poison. If it gets mixed in our body, we are sure to suffer in life. Arsenic poisoning tends to occur most often in areas of industrialization, whether you work or live there. Prevention is better than cure. Awareness about arsenic pollution should be created among people. We can also purify arsenic-contaminated water in a chemical process. So we should take the utmost care and guard against this poison. This is particularly difficult due to the fact that the problem is multi-dimensional and involves a number of sectors. We should find out an effective way of remedy to this problem. We along with the government should try to save ourselves from the growing menace of arsenic.